10 Things to do in Barcelona this Summer 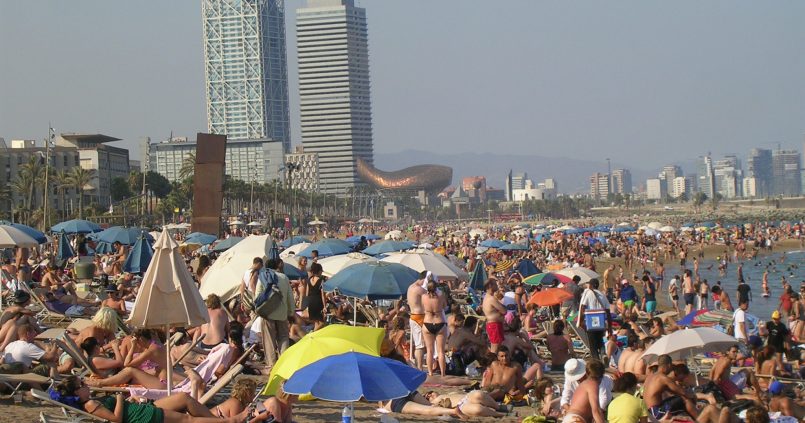 Truthfully anytime of the year is a good time to visit Barcelona, but during summer the city undergoes a dramatic change. The local residents seem to take their foot of the accelerator and Barcelona really slows down, a welcome change from the normal fast pace. As a long term resident I’m going to give you 10 reasons why you should visit Barcelona in the summer.

The Beach- It’s an obvious one I know, but who doesn’t like chilling out on the beach during the hottest months of the year. Barcelona is blessed with more than 4km of easily accessible beaches. Each beach has its own special atmosphere and with the beach bars serving good food and drinks, there really is no reason to leave the beach. Well there is one reason and that is to have a siesta.

The Nightlife- Another rather obvious choice considering Barcelona is famed for its nightlife, however in summer it is different. What normally takes place behind the closed doors of the pubs and bars spills out into the streets with local residents and tourists occupying the squares enjoying the lovely summer nights until the early hours of the morning.

Noche de Sant Joan- This is a very special night in Catalonia, an ancient festival to celebrate the summer solstice. Occurring every year on the night of the 23rd of June, the sky above the city is filled with fireworks, the beach is filled with people and bonfires and the partying lasts until dawn. The day after is very slow day in Barcelona and most things are closed.

Magic Fountain-It may seem a bit corny but I really like going to the magic fountain in Montjuic and watching the music and light accompany the jets of water as they are shot metres into the air or turned into a fine mist. It is the perfect way to spend a summer evening and the kids absolutely love it.

Sala Montjuic-During the summer months the imposing fortress sitting atop Montjuic throws open its doors and invites people to lay out a picnic rug on the extensive gardens and watch films as they are projected onto the castle wall. Screenings start at 10pm and there is usually a jazz concert beforehand. Usually the season stretches from the 30th of June to the 7th of August.

Piknic Electronik Barcelona- Every Sunday afternoon from June the 1st to September the 14th in the Joan Brossa Gardens on Montjuic, a mini music festival takes place. Head up to Montjuic Mountain and dance the afternoon away to the latest and best electronic tunes. If you have children don’t despair you are well catered for, there is an extensive zone for families to enjoy a picnic on the grass and listen to some cool music; parents can dance whilst the children take part in the organised activities and workshops.

La Caseta del Migdia- This place is a bit of a local secret so don’t tell to many people, please. Basically it is a scenic lookout overlooking the sea and the perfect place to watch the sunset over Barcelona. Best of all every Wednesday from the 3rd of June onwards, rumba and sardines starts, come and listen to some rumba whilst enjoying the taste of some fresh grilled sardines. The only problem is getting there but once there you won’t want to leave.

Paella- I know you can always get good paella in Barcelona but there is something really special about eating a delicious paella in the summer. Coming off the beach finding a great restaurant and enjoying a cold beer or crisp white wine followed by paella. Heaven!

Festa Major de Gracía- Imagine a whole neighbourhood, the elaborately decorated streets filled with people enjoying music and partying until the early hours of the morning. Well that is what happens in the neighbourhood of Gracía during their annual week long street party, this year from the 15th to the 21st of August. Activities which take place include castellers, correfocs and other cultural activities.

Contemporary and classic art in Barcelona