10 Things to do in Buenos Aires 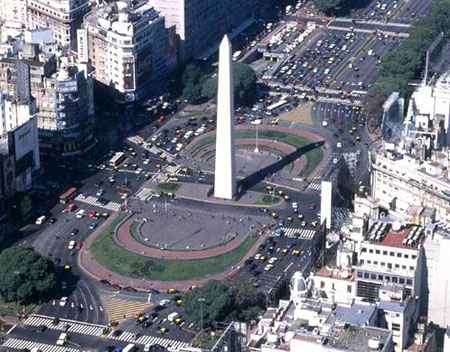 Buenos Aires is a huge city that is loved for its beauty and culture. Many tourists from all over the world travel to the Argentinean capitol to dance the tango, watch an exciting football match or admire one of the amazing sights. There is so much to do in this Latin American city that we decided to make a list of 10 things that are a must for travellers. Enjoy this vibrant city and let the exotic spheres carry you away.

The famous antique market in San Telmo takes place every day of the week, although on Sundays the market really comes alive. Both tourists and locals stroll between the different stands to see if they can score something valuable.
With all the ancient crafts and potteries, walking searching between the different market stands is like opening a window into Argentina’s past. Besides the antique, also Musicians and artists set up all along the market, from full scale Tango orchestras to solitary singers and everything in between.

At the Palermo Viejo the latest fashion of both internationally as Argentinean designers can be found. There are lots of different designer stores with cloths differing from cocktail dresses to t-shirts. Most of the designer cloths here are exclusive and contain experimental and creative prints. Go for example to Balthazar and search between the finest cloths made from Italian fabrics.

El Teatro Colón
This beautiful theatre is considered one of the best opera houses in the world. The Teatro Colón, that counts 2,487 seats, is the main opera house of Argentina and is praised by critics for the acoustics. After several years of renovation, the opera house was again opened in May. The building itself is so beautiful that you can watch it for hours.

Every half hour a 20-metre tall plastic Jesus rises from the ground at the wonderfully surreal Tierra Santa, the world’s first religious theme park. Surroundings, statues and lights show different stories from the bible. Also shows are being performed here. Absolutely a unique experience to see religion expressed in an exceptional way.

The neighbourhood La Boca is often automatically associated with football. Everywhere in the neighbourhood people are performing the sport, but the real magic happens in the stadium. When visiting Buenos Aires, you have to pay a visit to the Boca Juniors stadium. The team is fanatically supported by the locals which is easily noticeable when walking trough La Boca. Instead of watching the game in the Boca Junior stadium, you can also enjoy it in a local bar. Mix up with the locals and support your new favourite football team.

Feel like dancing? San Telmo is the place to be. Lots of tango performances are being given on the streets here. San Telmo is also perfect for following tango classes. Teachers with great skills can teach you the ins and outs of this magnificent dance. San Telmo is well known for the good quality of the lessons. Just walk in one of the many tango schools and join a couple of classes. Afterwards go to one of the tango clubs to enjoy a nice drink and dance the night away with your new dancing skills.

This gigantic Obelisk was erected in 1936 to celebrate the 400th anniversary of the first founding of the city. While its total height is 67meters (220ft), the build only took 4 weeks. The Obelisk has suffered a lot of vandalism. Activists sprayed it many times with political lines. After a while the government decided to put a large fence around it, which turned out to be effective. El Obelisco is located on the Avenida Nueve de Julio, one of the widest avenues in the world.