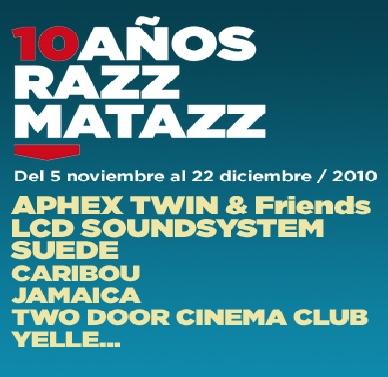 In 2010 Razzmatazz celebrates the 10th Anniversary

Those of you that couldn’t go to the Sonar 2010 celebrated in Barcelona and still wants to see the last performance by the New York group LCD Soundsystem in the catalan capital, are in luck as they have announced that they will be playing in Barcelona for the 10th anniversary of Razzmatazz. However, it is not the only performance lined up in long awaited anniversary celebration, because the concerts that will be taking place throughout the autumn and winter months will be the best, and practically a perfect conclusion to the year on the Barcelona music scene.

Not just that because this year’s hottest New York group, The Drums will be performing in the same place, although for a different reason. They have been announced to be playing in BeCool, but due to the large demand for tickets the organisers have switched the location of the event to a stage of larger magnitude, Razzmatazz 2. In any case, the date of the concert has stayed the same, the 13th of November. Furthermore, according to the organisers those tickets purchased prior to the change of location are still valid, therefore no changes will be necessary.

Amongst these performances and the rest of the other musical events that will be filling the Barcelona cultural panorama, this season promises to be one of the best musical autumns of all time, a good excuse to carry on enjoying Barcelona.