13 Reasons why you should Visit Seville 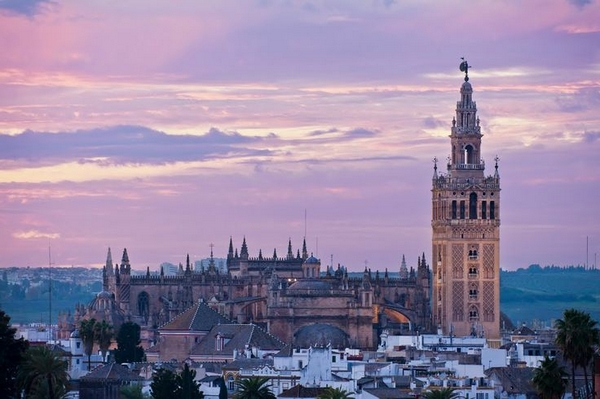 13 Things to do in Seville

I have visited Seville twice in the last few years, the first to do some sightseeing and discover the city. The second time to immerse myself in the vibrant life of the city and enjoy myself. Looking forward to my next visit, I would like to share what I most liked about the Andalusian capital with you. Here is my list of 13 things to do in Seville.

The Real Alcázar de Sevilla is one of the oldest palaces in Europe. Passing through the imposing doors is like travelling back into the glory days of Seville’s past. It’s worth taking your time to fully appreciate all the small details and the exquisite gardens. I think I could spend hours just gazing up at the ceiling of the Salón de Embajadores.

2. Get a bird’s eye view of Seville from the Setas de la Encarnación

Daring and controversial, the Setas de la Encarnación are one of those things you either love or hate. Housed within the wooden frame of the ‘Setas’ you will find Roman ruins, an exhibition centre, bars and several restaurants. The views of Seville from the top of the ‘Setas’ are simply remarkable, snaking paths link the different lookouts. It’s like walking over a sea of wood.

Pescaíto frito is a classic dish in Seville, but it isn’t done well everywhere. On one side of the market, next to the “Omnium Sanctorum”, there is a lane which hides a bustling little bar which is very popular among ‘sevillanos. It’s called La Cantina and is the perfect place to try good pescaíto frito and other tapas at very affordable prices. It only opens at lunch time.

A picturesque square located in the Parque de María Luisa, built for the Iberoamericana exhibition in 1929. It is e3asily recognisable thanks to its semicircular design, baroque towers, decorative fountains and the tiles which represent the 48 Spanish provinces. You’ll have a good time trying to identify them all.

5. Visit the Cathedral and go up the Giralda

One thing which is almost obligatory when visiting Seville is to visit the Cathedral and the Giralda. I don’t think anyone will regret doing so; it’s a very impressive building. Built on the remnants of a mosque, Seville’s cathedral is the largest gothic cathedral in the world. The cathedral is also the final resting place of Christopher Columbus. The patio de naranjas provides a great place to sit and escape the heat of summer and relax for a while.

6. Explore the Island of La Cartuja

Technically speaking it is not an island, but it is almost completely surrounded by the waters of the Guadalquivir River. Spread out over 300 hectares, it houses the Cartuja Monastery (now the headquarters of the Andalusian Contemporary Art Centre), Alamillo Park and Isla Magica. I particularly like the contrast between the traditional architectural style of the Monastery and the contemporary art pieces. A piece I really like is Cristina Lucas sculpture of Alice (yes, from Wonderland) trapped between four walls.

Sierpes and surrounding streets are Seville’s busiest. The area is full of shops, cafés, restaurants, buskers and compulsive shoppers. In summer the street is covered with awnings to provide some shade during the hottest part of the day. Sirpes street has a long history and wandering its length allows you to discover a little bit more about the life of the city, shopping is not obligatory.

8. Take in a Flamenco Show

I admit that I’m not a great fan of flamenco, but the last time I was in Seville, I was lucky enough to see a show which combined flamenco singing and dancing with plastic arts at the Muestra de Flamenco del Teatro Central. Watching flamenco live is entrancing and it is worth seeing at least once in your lifetime. In Seville you have many opportunities to see it whether it’s at the Bienal de Flamenco, en tablaos, theatres or associations.

9. Lose your way in the Santa Cruz neighbourhood

The old Jewish neighbourhood is one of Seville’s most emblematic. The narrow uneven streets create hidden squares and interior patios full of flowers. Santa Cruz is the mental image many have of Seville before visiting.

10. Wander along the Guadalquivir

Another thing everyone must do when visiting Seville is wander along the Guadalquivir river, cross over and wander through Triana. This popular neighbourhood can be considered a separate city. If you don’t believe me, ask a local and they’ll tell you. Take a stroll through Betis St and first contemplate Triana then from the other side of the river look back at Seville. The views are spectacular at sunset and at night.

Wandering along Cuna Street, the patio of this palace really grabs your attention, if you have some time why not pay a visit. Inside you will find Roman mosaics, Arabic ruins and antiques, famous paintings and other antiques which the Condesa de Lebrija collected over her lifetime. Spread out over two floors which can be visited separately.

12. Journey back in time at the Itálica Ruins

If you have a spare morning during your visit to Seville and you like history and ruins, a good plan is to catch the bus to Santiponce and visit the Itálica archaeological site. Many of the mosaics on display in the Palacio de Lebrija came form here. It was also the birthplace of Emperors Trajano and Adriano.

13. Have a few drinks at the Alameda de Hercules

To finish the day, I like to do as the locals do which is go out for some tapas. My favourite place to do this is La Alameda de Hercules, full of bars, terraces and newsstands. La Alameda has an air of bohemia you don’t get in other parts of Seville and at night it fills with Seville’s alternative crowd.

What are your favourite places in Seville? Is there anything else you recommend doing or seeing in Seville?