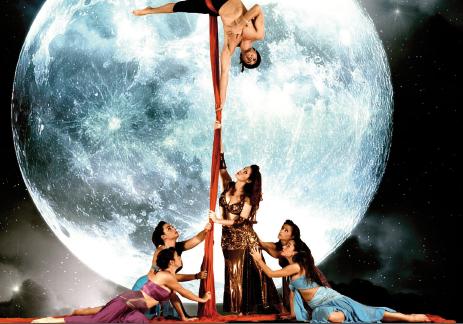 From the 12th of January to the 11th of February they will be celebrating the Malaga Theatre Festival with a fascinating programme that will most definitely win over all kinds of audiences with its magic. A total of 13 shows, 4 of which are never seen before productions, will be transforming Malaga into the biggest stage in Spain.

The Cervantes Theatre and the Echegaray Theatre will once again play centre stage in this festival, however they won’t be the only ones as activities will be running alongside the performances in various locations across the city including dramatic readings, classes and workshops, etc.

In this 29th edition of the Theatre Festival in Malaga there will be a special focus on classic theatre. Two timeless productions with a more modern take are on offer including a new version of “Macbeth” and “La Celestina” starring Gemma Cuervo. Shakespeare will also feature again with “Shakespeare’s Women” directed by Rafael Álvarez playing “the Witch”.

Cirque Style Balagan is also participating in the Malaga Theatre Festival. It comprises a unique circus show created by Misha Martorin responsible for some of the most surprising acts in Cirque du Soleil. More than 30 artists will be performing in “Balagan” including trapeze artists, dancers, clowns and acrobats approaching the grandeur and cheer of circus in the intimacy of a theatre.

The always controversial Fernando Arrabal will be presenting “The Garden of Delights” and the Mu Theatre Company will reflect upon death, time and love in “Suicide of An Angel”. The programme will be completed with “No Amanece en Génova”, “Wind in a Violin”, “Crack!”, the autobiographical monologue of Henri Lenormand, “Time is a Dream”, a mask theatre performance with “André and Dorine”, “Dream Casanova”, with the Arden Producciones theatre company, and a combination of oriental dancing, acrobatics and theatre with “The Dove’s Neck-Ring”.

There will further activities running alongside the performances in the Malaga Theatre Festival including an informal talk with Fernando Arrabal, and the “Closed Curtain” session consisting of scientific readings, interpretation workshops and oriental dance classes.

Entrance prices range from 7 euro to 42 euro, depending on the show. Curtain up!