3 things to do in Seville this Christmas 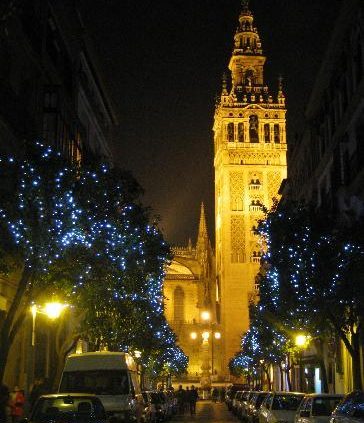 Christmas and New Year in Seville

Following on from our 3 things to do in autumn blog, which we hope has get you well prepared for Christmas and in the festive spirit of things, is our 3 tops things to do this Christmas in Seville. As mentioned previously, Seville at Christmas is just stunning, as the centre, buildings, and orange trees lining the main street Avenida de la Constitucion are adorned, decorated and spectacularly lit up in honour of this festive holiday season and the Sevillians are celebrating this season the only way they know how, with a family fiesta and lots of good food!

Taking place on the 8th of December and kicking of the many Christmas celebrations is the Day of the Immaculate Conception, which is an official holiday in Spain. In Seville it is better known for the evening prior to the fiesta as ´los tunos` or university student musical groups dress up and head into the streets to play the guitar and sing into the night. Everyone ends up in front of La Purísima located next to the cathedral in the city centre, leaving flowers and taking turns serenading the statue representing the Virgin Mary. Furthermore, many people flood the streets and gather around the statue before midnight to get a good view of the serenading then the following day there is a service in the same Cathedral with children performing the traditional dance of the “seises”, the colour of the costumes this year being silver and blue. This dance has been a liturgical tradition for several centuries, and previously the groups comprised 16 choir boys hence the name “seize” which is 16 in old Castillian and that has been converted into “seise” by andalusian spanish, however now the dancing groups are made up of ten but the performances are as still beautiful and entertaining to watch.

New Years Eve and Day are traditionally celebrated with the family and celebrations involve a big dinner at first and then a night out at a party. In fact, this time of year is probably more celebrated than Christmas day in Spain and the meal comprises a banquet of dishes after dishes of traditional Spanish food. Once the meal is over traditional holiday sweets such as turrón and champagne help finish the night off or gets you started for more celebrations. Many bars and restaurants have private parties where you can pay a certain amount for food and drink, including a bottle or glass of champagne. Alternatively, the locals gather in Plaza Nueva to wait for the New Year and the chime of the clock at midnight whereby a grape is consumed at each stroke, meant to bring you good luck for every month of the New Year. This is when the real party begins and everyone goes out to finally and traditionally eat some churros (like a Spanish donut and often served with warm chocolate) in the morning following a full night of fiesta and New Year fun. Start yours off in the right way and come to Seville to welcome the New Year in!

Taking place on the 6th of January, this event is equivalent to the epiphany in the UK but with parades, parties, sweets, costumes and an overall city celebration with an abundance of style which tops all other festivities in other countries to be sure. The kings ride around on beautifully decorated floats accompanied by children (called a Cabalgata) and travel through the city. There is usually different ones for each neighbourhood (such as Triana, Macarena, Mairena etc.) and then the main Cabalgata that passes through the centre. They throw sweets to the children and adults that have come to see the event as they pass through the streets in a procession and it really is a lively and festive affair with lots of music and dancing, as well as some spectacular costumes. In some cases the kings ride by on horses and perform tricks. This is traditionally the day that gifts are given and exchanged much like the 25th of December in other countries. Furthermore, el rosco de los reyes, a donut shaped cake, is traditionally eaten on this special day.

So, as you can see Seville celebrations are full of customs and traditions that go back a long way, in addition to being very family-orientated making this enchanting city the perfect place to be at Christmas with your own family, or an alternative and festive way of spending this holiday season with your friends bearing in mind all the events on offer.