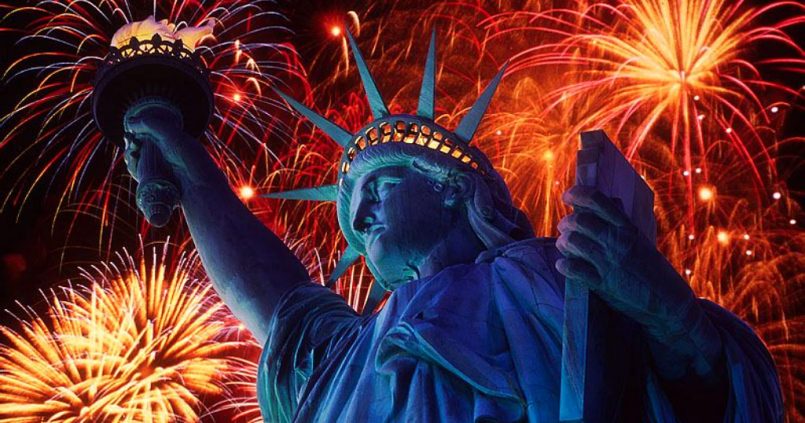 A popular moniker for the US is “the land of the free”, but it hasn’t always been so. It was only on July 4th, 1776 that the USA finally declared its independence from Great Britain. Independence Day in the USA since then has been a festival of extreme national importance, and is about having fun as much as it is a serious political celebration.

Independence Day 2014 in New York is sure to be just as spectacular as ever, and even if you’re neither American nor particularly patriotic, it’s difficult not to get caught up in the glistening firework displays, the swell of the music, the whirl of the people and the irrepressible North American spirit.

The biggest celebration, as ever, is the evening firework display organised by department store giants Macy’s. Attracting well over a million people, this is where the day’s events culminate, and where everyone who is anyone will be on the 4th of July in New York. The display attracts a huge press presence, featuring on national and international television and pulling in live performances from some of the hottest American stars du jour. Be warned: streets will be closed beforehand, toilet facilities are scarce and the New York summer can be hot, so bring plenty of water. If arriving hours in advance to get a good place to watch the fireworks from doesn’t take you fancy, various companies offer cruises down the river, allowing you to watch the fireworks in comfort.

When: 4th July (when else?) at 9pm. Where:Hudson River. How much:Free.

For pure, silly fun, try the hot dog eating competition organised by Nathan’s Famous. In the most diverse city in the world, it comes as no surprise that this quintessential tradition was invented by four immigrants intending to better one another’s level of patriotism (or at least, that was what they told their wives). Now with its own traditions, rivalries and cult followings, this is a daytime event not to be missed. Get it down you. In the wee hours of the morning, this year the Fraunces Tavern Museum will also be organising a guided stroll through the financial district of the city, with the title “Revoluntionary War New York”. Only for the most hardcore history buffs, we say, although the champion’s breakfast will appeal to all.

When:4th July, 2am to 6am.Where:meeting point disclosed with ticket purchase. How much:$ 20.

As well as various concerts and other events throughout the city, the 4th of July in New York is a great time to relax in Central Park with a picnic and soak up the festival atmosphere. A public holiday, expect to find many official buildings closed, although bars, cafés and restaurants will be working to max. capacity.