A Berlin of fireworks in the Pyronale 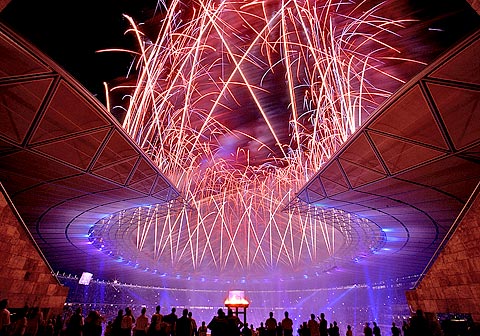 Pyronale, the international fireworks world championship of this 2011

If you like pyrotechnics, the smell of gunpowder and colourful lights then on the 2nd and 3rd of September we suggest you head to Berlin for the Pyronale, a magnificent fireworks show that lights up the Berlin sky every autumn.

The event, celebrated in the Maifield Olympic Stadium for the 6th year running, welcomed more than 61,500 spectators last year. Over the festival days, six teams from different countries compete for victory. This year the participants will be from Malta, Canada, Russia, Finland, England and Poland.

The panel of judges is made up of pyrotechnic experts and famous artists and figures that select the best show in accordance with the overall impression, as well as based on other criteria such as their originality, techniques employed, the colours, and the music and light coordination. If you’re in the crowd, you can vote for your favourite with your mobile. At the end of the second evening the winners will be announced and awarded a prize.

The participants should stick within a certain budget and follow certain rules when planning their shows. In 2011, a minute and a half of the show should be without music and silver and purple colours must be used. Another 4 minutes of the show should include a medley of classical music in the background. This includes the Carnival of the Animals by Camille Saint-Säens and Hungarian Dances by Johannes Brahms. The contestants can do what they want with the final 10 minutes of the show as long as it based on their country.

You can buy tickets over the internet on their official website. Prices range from 19 euro for a normal ticket where you watch the festival stood up, to 146 euro for a VIP ticket.

If you’re lucky enough to be in Berlin in September, make sure you don’t miss out on the Pyronale and its fantastic choreography of colours and sounds. It is the biggest and most spectacular fireworks competition in Germany!