A Free Walking Tour of Florence: A Great Way Not to Get Lost. 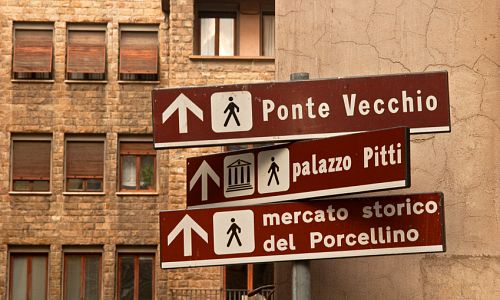 Delve into history with a Free Walking Tour in Florence

I like to think I have a pretty good sense of direction, most of the time. But take me away from my all too familiar surroundings and I’ll be walking around in circles, a map held up close as I try to identify familiar landmarks, streets, in fact just about anything which will get me going in the right direction. Also being a man I don’t like asking for directions, it’s a man thing. In an attempt to leave the map in my pocket and get my bearings and learn some history I signed up for a free walking tour in Florence.

Using a map I made my way to the tour meeting point just in front of the Santa Maria Novella Church. Fortunately no reservation is necessary you just show up at the allotted time, 11am for the Renaissance Tour, and wait for the guide to show up who in this case was Filippo. Dutifully following behind Filippo as he led the group through the streets of Florence imparting his knowledge; we stopped outside the magnificent ‘Il Duomo’, wandered around Piazza della Signoria, made our way down little side streets before the tour ended outside the Church of Santa Croce. This free walking tour of Florence lasted roughly an hour and half and moved along at a good steady pace with Filippo pointing out places and statues I otherwise would have missed. Impressed with the first tour I decided to go and have some lunch at an osterie and then do the Medici Tour beginning at 2pm.

The meeting place was the same as the first and so was the guide, welcome back Filippo. Once again we set off behind Filippo as he explained the history of the Medici family. We stopped outside the Palazzo Medici-Riccardi, visited the Palazzo Vecchio, learnt all about the Ponte Vecchio as we stared into the waters of the Arno river before making our way to the final stop on the tour, Palazzo Pitti. The afternoon tour lasted roughly the same amount of time and was equally as informative.

A free walking tour of Florence will provide you with a brief history of Florence, introduce you to places you’d like to return to and will more importantly enable you to put away the map, at least for a little while. Just remember even though the tours are free it is customary to give the tour guides a tip for their time. What you give is up to you but I saw tips of between €5-€10 being given.