A guide to the best beaches in Cadiz 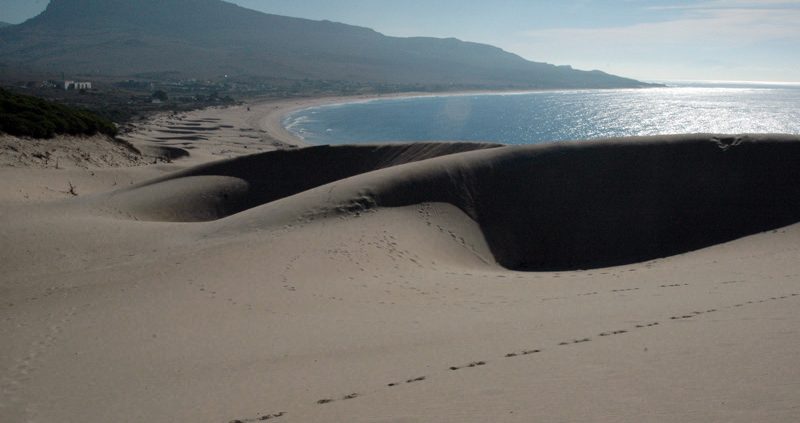 Now that spring has arrived and the sun is starting to poke its head out of the clouds for some warm weather, its time to start talking beaches. We are going to focus on the province of Cadiz and its coastline bordering the Mediterranean Sea as well as the Atlantic Ocean. It is exactly for this reason that Cadiz is perfect for all kinds of holidays, whether you are planning to come with your family to a calmer and shallower part of the sea, or if you fancy spending a few days practising all kinds of wind and water sports in rougher waters as Cadiz is not short of them. Thus, here are our recommendations in the way of beaches on the coast of Cadiz.

Guide to the best beaches in Cadiz

The most famous is without doubt Bolonia beach. This beach, situated in Tarifa, has enormous sand dunes and tourists can lose themselves in the 3km of beach with its fine sand and transparent waters. It is an undeveloped area meaning you can go nude in the east area, whilst those who are more interested in more cultural aspects can visit the roman ruins of Baelo Claudia. These ruins comprise the remains of a large city dating back to 200 BC, which was destroyed by a tidal wave. It’s a relaxing place and a nice distance away from all the noise where you will be able to lose yourself in the natural surroundings.

Valdevaqueros beach on the other hand is much preferred by surfers. It is a long and wide beach where visitors looking to spend a quiet day on the beach to enjoy the sun, clean waters and white sands can do so in harmony with the most hardcore surfers allured by the waves and the ocean tide comprising the perfect conditions for practising this sport. In addition, along the beach you will find restaurants and beach bars where everyone gets together in harmony to enjoy the benefits of the climate in Cadiz.

Zahara de los Atunes. Carrying on up the N-340 will take you to Zahara de los Atunes, a beach located next to a small town with the same name. It is very typical of the area with small white houses and the town has a large beach with fine sand where families and young people go to spend a few relaxed and chilled out hours under the sun to then make their way to one of the lively bars lining the beach. Los Alemanes beach can also be found not far from there, comprising an isolated beach usually visited by those of a higher social stratum, however given that it is separated from the more urban areas it is definitely recommended if you fancy spending a day under the sun and next to the sea without mass crowds of tourists.

Barbate. If you carry on along the coast you will eventually arrive at Barbate, a town in Cadiz situated on the coast of the Atlantic, which has some very nice beaches with some great facilities ideal for families who are looking for a typical beach with beach bars, showers and sports.

Caños de Meca. It is a small district in Barbate located on the Costa de la Luz and next to the Breña National Park. On its coast you will feel surrounded by nature in what can be considered a really hippy and surfer feel place, given that Windsurf fans make their way there allured by the wind, the waves and the very few tourists in this small Cadiz town surrounded by pine forests and mountainous coastlines. You can practise all kinds of water sports here such as kitesurfing, bodyboarding or diving such as snorkelling. In addition, you can visit the famous Trafalgar Lighthouse, site of the famous naval battle in 1805 when Admiral Nelson’s battalion defeated the franco-spanish fleets.

El Palmar. Still in the area of Barbate and meeting point for surfers, thus whilst you enjoy a nice sunbathe you will see nothing but young people going surfing and windsurfing.

Conil de la Frontera. This is a town located on the coast of the Atlantic whose main attraction resides in the hidden beaches surrounding it. Thus, you will be able to lose yourself in these secret beaches hidden behind the cliffs that have generated violent contact between the Atlantic Ocean and the earth over the years. Hidden beaches such as Poniente, Melchor, Sudario and Camacho, as well as Faro, Tío Juan de Medina, Aspero, Pato and Failecillo, amongst many others comprise little paradises of white sands which you can only get to after climbing down some natural stairs carved into the rocks. Finally for some really tasty tapas and lively bars, the town of Conil de la Frontera offers an animated night life in summer that you definitely can’t miss out on.

Chiclana de la Frontera. Town in Cadiz with an extensive coastline and impressive natural surroundings thanks to the ocean currents that generate huge beaches gracing the front of the Castle of Sancti Petri that was built on the point on the mainland.

Sanlúcar de Barrameda. If you continue along the coast, you will pass by several towns with some stunning beaches and coasts such as Cadiz, Chiclana and Rota until you get to Sanlúcar de Barrameda. Situated right at the mouth of the Gualalquivir River Sanlúcar de Barrameda has 6km of urban and wild beach. There is Bonanza beach surrounded by salt mines and marshes that belong to the natural surroundings of the Doñana Nature Reserve with golden sands and calm waters. Bajo de Guia beach with its golden and fine sands is more urban with its promenade and Yacht Club which is ideal if you want to go sailing. The Calzada or Piletas beach, is an urban beach extending over 2,300m with a promenade where horse races, declared an International Tourist Interest, are held every summer. La Jara beach is a semi-urban beach which is a great place for going sailing.

Here is a map of these Cadiz beaches.

Posted in Tarifa, Things to do in Tarifa
Claudia