A Tour of Baroque Rome 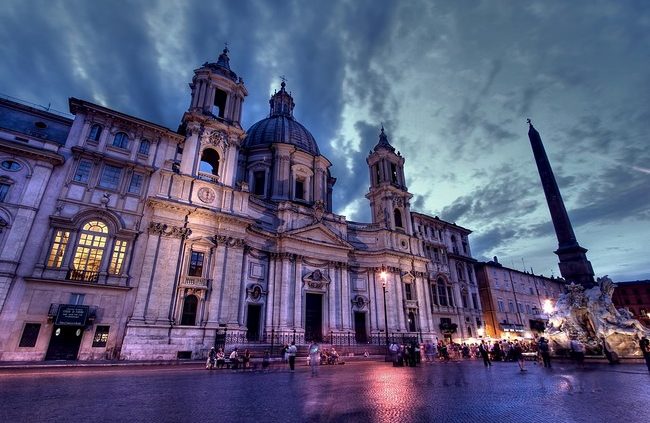 When you think of Rome you immediately picture the Coliseum, the ruins of the Imperial Forum… But the Italian capital has had many other moments of splendour, including the Baroque period, in the 17th century, when several popes promoted artwork in Rome by funding great architects, such as Bernini and Borromini. These artists adorned the city with squares, fountains, churches, palaces, courtyards, sculptures and other buildings, fundamentally changing its appearance.

Piazza Navona is a remarkable example of Baroque Rome. In the centre is the Four Rivers Fountain, one of Bernini’s best-known pieces. The Rivers Danube, Nile, Ganges and Plate symbolise the four continents of Europe, Africa, Asia and America. Piazza Navona is also home to the church of Sant’Agnese in Agone, whose concave façade was designed by Borromini.

Another major work by Bernini is the church of Santa Maria della Vittoria, home to the sculpture The Ecstasy of Saint Teresa, which shows the saint in a state of religious ecstasy while an angel aims an arrow at her heart.

The elliptical church of Sant’Andrea al Quirinale, also by Bernini, is rich in polychrome stucco and marble and has a large number of chapels inside. Further along the same street, Via del Quirinale, is Borromini’s masterpiece, the church of San Carlo alle Quattro Fontane. The four exterior fountains represent the Rivers Tiber and Arno and the Goddesses Juno and Diana.

Another great building by Borromini is the church of Sant’Ivo alla Sapienza, designed as the chapel for the University of Rome. You should also see the famous colonnade of San Pedro del Vaticano, the Fontana della Barcaccia in Piazza di Spagna and the Fontana del Tritone in Piazza Barberini.

The most famous fountain in Rome, however, is without a doubt the Fontana de Trevi. Built in Baroque style in the 18th century by Nicola Salvi, it is the biggest fountain in Rome, famed for its harmonic form and very expressive sculptures. Don’t forget to throw a coin in if you want to return to Rome!

Posted in Art and Museums in Rome, Rome
Marketing Team