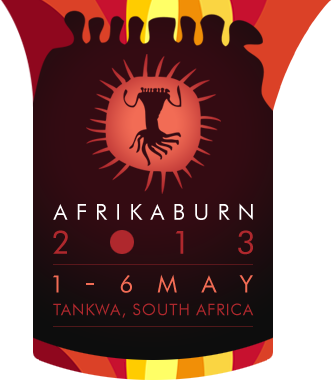 On a baked desert plain deep in South Africa’s Karoo desert a makeshift village slowly begins to take place. The village is inhabited by a strange mix of people in crazy outfits; animals, aliens, horned beasts and others who are wearing nothing at all. Stages are erected, already the thumping beat of music can be heard from various points across the plain, colossal brightly lit art installations are silhouetted against the desert sky and there is fire. The fire reaches into the night sky illuminating all those who have gathered for Afrikaburn 2013 occurring from the 1st to the 6th of May.

Now into its seventh year, Afrikaburn is a gathering of self-reliant, expressive people who create themed camps, mutant vehicles, colourful costumes and fantastic music, a place where freedom of expression reigns supreme.

Whilst Afrikaburn may be smaller than its North American cousin Burning Man it packs more of a punch. Don’t miss it.

Afrikaburn 2013 occurs over 300km from Cape Town it offers the perfect opportunity to exploreteh city before or after the event. Discover the beauty of Table Mountain, wander the colourful streets of Bo Kaap or if you are feeling really adventurous dive with Great White sharks. If that is a bit too adventurous for your liking visit some of the sights in and around Cape Town.