Alice Cooper in concert in Madrid and Barcelona 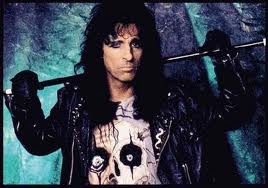 Theatre in Barcelona this 2010

Vincent Damon Furnier’s career, Alice Cooper being his stage name, started a rock and roll band in 1964, with some hard rock and shock rock sounds that could be considered pioneering in Glam Rock genre. The peak of his long career was in the 70s, although throughout the decades his band has maintained their reputation as a music reference, achieving outstanding success from the 90s up to today.

Alice Cooper has been the forerunner of mixing rock and performances in his concerts, in which he mounted small theatrical productions on stage, with sinister make up, concerning lyrics, and provocative representations that could include executions with guillotines and electric chairs. At the start of the band, Alice Cooper was greatly influenced by Frank Zappa, who was the one who really formed the group, and who advised them to incorporate extravagant elements in their performances. Their look and attitude have influenced the formation of later bands such KISS, White Zombie, and Marilyn Manson, amongst others.

Thus, this artist and his band are definitely worth seeing live when they come to Spain, and to witness their energy, as it is more than the fact that they have released more than 30 albums, it is the combination of theatre, tragedy and mystery, in addition to the quality of the music which has converted them into an international music reference. This is thus a once in a life time opportunity to see this music legend and enjoy his unusual performances.