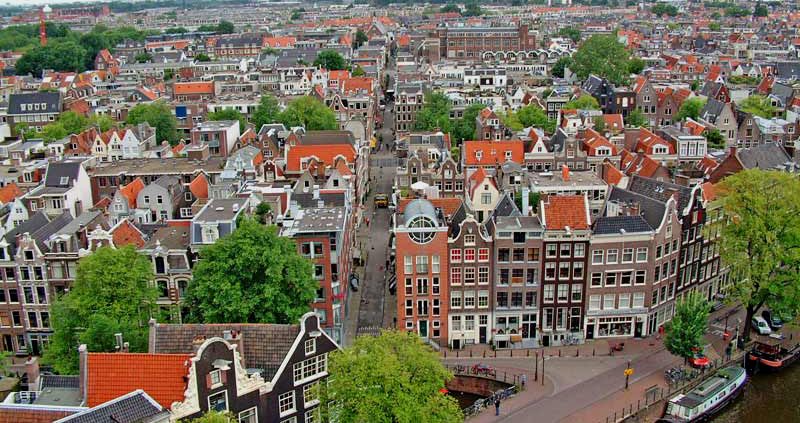 Brouwersgracht and the Jordaan Neighbourhood Of all the canals in Amsterdam, Brouwersgracht is not the most famous but it is one of the most beautiful. It is considered the beginning of the Singel, Herengracht, Keizergracht and Prinsengracht canals. From Brouwersgracht, the canals run parallel, forming a graceful arch, before emptying into the Amstel River.

Brouwersgracht is in the heart of the Jordaan neighbourhood. This neighbourhood suffered many economic and sanitary problems during the 19th and early 20th century. This working class neighbourhood underwent a period of explosive period of growt during this period. As a result, the houses in Jordaan were overcrowded with families; it wasn’t unusual for ten people to be sharing a single room.

Since the 30’s many improvements have been made. A new sewage system was installed and after WWII, the government decided to carry out restoration work on Jordaan´s historic buildings and canals. This was the turning point of this the popular neighbourhood. Today, Jordaan is one Amsterdam’s most expensive and fashionable districts famous for its cafés, restaurants, art galleries and exclusive shops. Returning to Brouwersgracht, this canal gets its name from the multiple breweries which once lined its banks the name can be translated as “Brewers Canal”. This canal marks the northeast limit of Amsterdam’s canals and is also the most peaceful.

Getting to Brouwersgracht from Centraal Station is quite easy. You can walk until you reach the picturesque Lekkeresluis Bridge. This bridge is very close to the famous Noordermarkt, where you can find vintage clothing and antiques. Every Monday and Saturday there is a fabulous ecological food market. Close by is the Noorderkerk ( North Church) where classical music concerts are often held.

But above all, the Noordermarkt is the perfect place to enjoy a cup of tea, a glass of wine or a delicious brunch or snack. The Winkel Café, next door to the market serves one of Amsterdam’s best apple cakes. Another feature of the neighbourhood are the much south after houses, warehouses which have been converted into desirable accommodation.

We have to continue with our voyage through Amsterdam’s Canals, so let’s not dwell in this beautiful canal for too long. Enjoy the food and views before heading off to explore more of the canals. We still have a lot to discover…