Annual Winter Festival in Barcelona brought to you by Eulalia, the patron Saint of the city 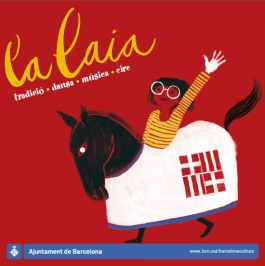 Annual Winter Festival in Barcelona this 2011

From the 12th to the 14th of February the Barcelona Annual Winter Festival will be taking place and bringing an array of activities for locals and tourists a like. This exciting event is a perfect opportunity for those who have never visited the Catalan capital to discover some long-lasting traditions, take part in some Catalan celebrations and learn about the history of the city in a fun and colourful event.

The Annual Winter Festival which is organised by the Barcelona City Council aims to highlight Barcelona values and traditions through an array of activities such as listening to the Bell Chime in Plaça Sant Jaume (on the 11th), the performance of the hawks in the city (12th), the Gegantona Eulalia (Laia) Dance, the Giants and the Eagle Dance, and Saint Eulalia or the Saint Eulalia Correfoc (Fire Run on the 13th), Laia being the representative of the festival and patron saint of the city.

A characteristic feature of these festivities is the participation of student from schools throughout the metropolitan area and beyond who will be sharing the stage with professional artist over the festival period.

Final celebrations take place on Sunday with an animal show parade making its way through the city including 13 different types of farm animals in honour of Saint Eulalia.

The following districts will be making their contribution the show with their animal parades; La Porca (Pig) from the Sant Antoni district, the Gallina Ballarica (Hen) from Vilfranca del Penedès, and Pavo (Turkey) from Nulles amongst others.

As mentioned previously, Laia is representative of the festival, the little girl who died defending her beliefs. The story goes that Laia was very well known for her charity work. Poor people would call at her door and never leave without a handout. In the early fourth century the emperor Diocletian ordered the relentless persecution of Christians. Brave little Laia appeared before the Diocletian Court asserting her ideals and harshly rebuking the way in which he treated Christians, at the mere age of 13.

Deciano locked Laia in prison and condemned her to thirteen tortures corresponding to her age. In accordance with tradition, one of these tortures consisted in putting her into a barrel with knives (or glass) stuck into it and rolling it down the street. This is famously called the “Baixada de Santa Eulalia” or Saint Eulalia’s Descent. In addition, to other gruesome tortures she was finally crucified on an X shaped cross. Legend has it that upon her death her hair began to grow and that it snowed.

Her tomb currently lies in the crypt of the beautiful Barcelona Cathedral (Cathedral de Santa Eulalia) which is located in the Gothic district, or here to be more precise.

This is a definitely an event that you could celebrate with your family. Bearing this in mind, there is nothing better than renting a Barcelona apartment so you can enjoy the aforementioned festivities as and when you please with all the comforts of home and everything you need for you and your family to enjoy some fun and relaxing holidays in the Catalan capital.