Apartment of the week in Granada: The Santa Ines 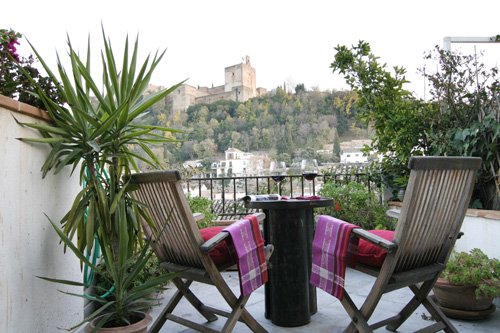 It’s Friday again, and regular followers will know that this is the day we share with you our top pick of the Friendly Rentals apartments. Following last week’s description of our favourite apartment in Bilbao, today we’ll continue with the theme of “a slightly different kind of holiday in Spain” and impart some of our knowledge about our apartments in Granada…

Barcelona and Madrid are, inarguably, some of the world’s top tourist destinations. But Spain has lots of beautiful things to see, that extend far beyond its two largest cities and swing a million miles away from more typical holiday destinations like Benidorm and Lanzarote.

Granada is at the same distinctly time Spain and not Spain: a blend of the Mediterranean and the Arab world that lies just to its south; familiar holiday flavours with a touch of spice. The district of Albayzín in Granada is the site of Elvira, the ancient Moorish city on which modern Granada now stands. A UNESCO World Heritage Site since 1989, its ancient winding streets conceal the secrets of centuries, and as well as being in the city centre, looks directly up to the Alhambra palace.

The Santa Ines apartment in Granada (hosts two people), our recommended short-rental accommodation this week, won our hearts over primarily because of its amazing views of the Alhambra. WiFi and Plasma TVs are are very well (and, in fact, this apartment has both), but having a coffee on your balcony in the Granada sun while enjoying your own private views of the palace is an unforgettable experience you’ll remember for the rest of your life.

The views are not the only charms that this apartment in Granada has to offer. Decorated in period style, the spiral staircase winds up through the house, past the comfortable, cool living room; past the fully-equipped kitchen; past the spa-like bathroom and the king size bed in the bedroom and up to a tiny office space in the top. Of all our apartments, we’d particularly recommend this one for anyone looking to stage a romantic getaway in a villa in Granada.

Have you ever gone on holiday in Granada? Share your experience by filling in the comments box below.

Posted in Granada, Things to do in Granada
Marketing Team