Apartment of the week in Paris, the Marais Perché 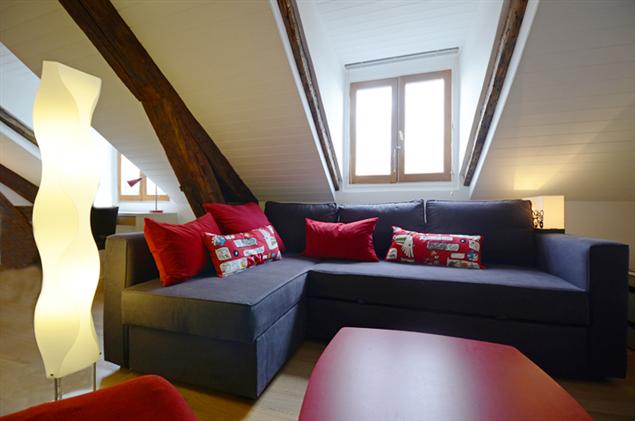 It’s been a while since we last wrote about Paris. One thing for sure, however, is that the French capital is absolutely beautiful during this time of year, as it gets ready for autumn with its orange watercolour tones and the intense smell of coffee which wafts through the terraces and bars in the late afternoon.
Furthermore, as autumn comes closer, Paris shows one of its most cultural, daring sides, with events such as the Techno Parade, European Heritage Days and the Nuit Blanche, which will deliver the world of the arts to the city on the 6th of October.
The apartment which we want to recommend this week is not just in the heart of Paris, but in one of the most chic zones of the city: Le Marais. This traditionally Jewish nieghbourhood has a large history, and is currently one of the most cosmopolitan, bohemian districts of old Europe. Its streets contain a plethora of artistic buildings from the c. 16th and c. 17th, various small museums and a good number of restaurants, bars, galleries and fashionable boutiques.
Your accommodation in Le Marais allows you to live in an authentic, relaxed Parisian space during the day, without missing out on all the entertainment that the night brings to the City of Light.

The Marais Perché apartment is a cosy studio with sloping roofs and hundred-year-old wooden beams, which has recently been completely remodelled. It has capacity of up to four people, and torrents of light to stretch out in while soaking up the warmth of the Parisian sun in bed.
This apartment in Paris has a very personalised style, and all kinds of small details to make you feel at home. It comprises internet connexion, cable and satellite television, heating, microwave… The open kitchen is fully equipped to allow you to practise your skills as a chef, or even just make yourself some toast to enjoy with those delicious French cheeses.
The Marais Perché apartment is very close to the Place des Vosges, the Îsle de la Cité and the Place de la Bastille, making it the perfect accommodation to discover Paris from. All these tourist sights are an agreeable stroll away, and many more of the city’s main attractions are just a few minutes away in Metro. See you in Paris?

Posted in Paris, Things to do in Paris
Marketing Team