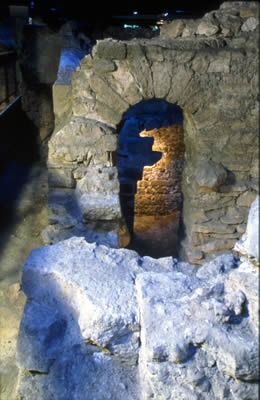 The Crypt of the Notre Dame

To continue with our ´Paris Tourist Attractions for Dummies,” blog we at Friendly Rentals have been working really hard to find things that are interesting for you to do in Paris, but of course with a twist. So as a follow up to our “Paris Catacombs” blog which we hoped you liked, and given that our motto at Friendly Rentals is ´share and share alike`when it comes to local knowledge and experience, we thought we would let you in on another little treasure, that a lot of people overlook, and that promises to be extremely interesting and entertaining, the Crypte Archéologique de Notre-Dame(Archaeological Crypt of Notre Dame).

Yet again we are delving into the dark but fascinating world of underground Paris, however this time they’ll be no looking at remnants of dead bodies but fascinating Gallo-Roman artefacts instead.

The Notre Dame Crypt is the most important and largest of its kind in Europe, extending over 80m under the beautiful gothic Notre Dame Cathedral and is truly an intriguing attraction for visitors. It comprises a splendidly recreated settlement of the Parissi Celtic tribe that first settled in this charming city 2000 years ago and from whom it takes its name, as well as the ancient roman city that took its place.

As part of the attraction it explores the lives and artefacts of the tribes and civilisations that dwelt in Paris a long, long time ago, and the remains of a house from Lutèce, the precursor to Paris are located there. There are numerous artefacts which will give visitors a fascinating insight into the lives of the mighty Roman Empire and how they lived in Paris.

The crypt under the Parvis (square) of the Notre Dame was built to protect the ruins discovered during excavations that began in 1965, thus preserving foundations and vestiges of buildings which were constructed.

The Archaeological Crypt was finally opened in 1980 to the public with the aim of presenting elements from the successive buildings constructed on the site from ancient times to the 19th Century. It is accessed by stairs opposite the cathedral, and near the police headquarters.

So if you can’t get enough of this underground stuff, and you would like to see buildings and artefacts dating back to the origins and beyond this great city, then this is definitely not one for you to miss!