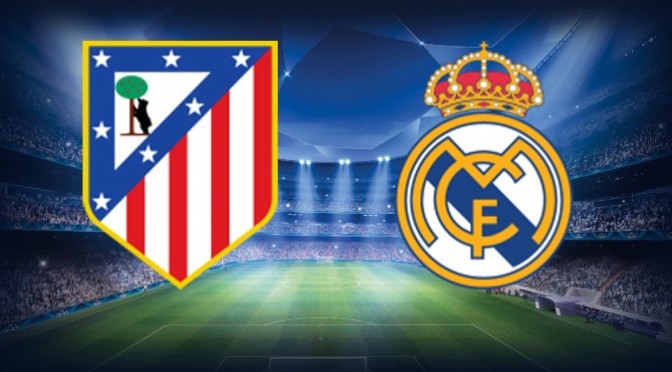 On Saturday the 24th of May, Atlético de Madrid and Real Madrid football clubs will take to the pitch at the Estadio do Luz in Lisbon to decide who will be 2014 UEFA Champions League winners. This will be a game of firsts, the first time both teams have met in the final of a European championship, if Atlético de Madrid win it will be their first Champions League trophy, if los Blancos win they will be the first club to take home the trophy ten times.

Atlético de Madrid are led by the formidable partnership of manager Diego Simeone and star forward Diego Costa. Simeone has infected his side with the same passion and ambition he displayed during his five years at the club.Costa has been a key player in Atlético making it into the Champions League Final in Lisbon and in the clubs aspirations to win la Liga. In reaching the final Atlético knocked out European heavyweights Barcelona and Chelsea. The harassing play and solid defense added with the impressive strike power of Atlético make them worthy finalists.

Atlético’s cross town rivals Real Madrid feature two of the most expensive signings in football history Ronaldo and Bale. These two star players will lead the offensive for their much coveted tenth Champions League title. Real Madrid made a mockery of last year’s champions Bayern Munich and ex-Barcelona coach Pep Guardiola knocking them out 5-0 on aggregate in a very one sided semi-final. Real are one of the best sides in Europe with an impressive back four who can soak up a lot of attacking pressure before releasing the ball forward where the devastating pace and skills of Bale, Ronaldo and Di Maria are just too much for the opposition to handle.

Atlético will go into the 2014 Champions League Final knowing that they can beat Real having already done so once this season. Madrid too will be feeling confident that they have the edge over their rivals. What this match boils down to is the ambition and as Simeone so elegantly put it ‘los cojones’ of his team against the power and skill of a Real Madrid side looking to add to their already impressive silverware collection. Whatever the outcome of the Champions League Final in Lisbon, the fountains of Neptuno or Cibeles will either see celebrations or commiserations.