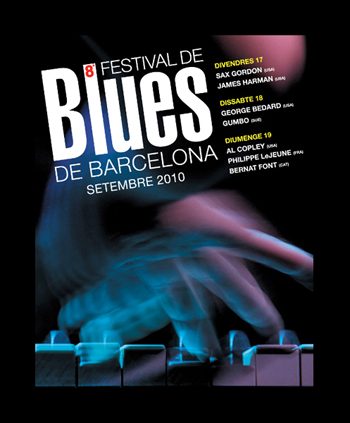 As has been the case for the past 8 years, the Blues Festival is being celebrated this September in Barcelona. It is a free initiative that aims to bring the public closer to this style of music with performances taking place in different locations of the city.

Between the 10th and the 20th of September, a dozen free concerts with performances from leading national and international artists such as Sax Gordon, James Harman, George Bedard, Al Copley, Gumbo, Philippe LeJeune and Bernat Font will be taking place in diverse locations in this exciting city.

To further involve marginalised minorities and communities who do not have access to this type of musical event, two events have been organised by the ´Escuela Taller de Blues` or ´Blues School Workshop’ to be performed in the Was-Ras and the La Modelo prison.

This festival will kick off the 10th of September with concerts and performances in the ´Sala de Luz de Gas` with the ´Blues de Circ` show which combines circus language with music.

The remaining concerts and performance will take place in different locations in Barcelona such as the Valldaura sports complex in Nous Barris, Harlem Jazz Club, Jamboree, Honky Tonk, Blues Bar, Ámbit Cultural room in the Corte Inglés, and the Civic Centre in Barri de Prosperitat.

Thus, blues music lovers have no excuse to not enjoy their favourite music this month with free performances organised by the foremost members on the national and international music scene.