Barcelona Fashion White Night until midnight on the 2nd of December 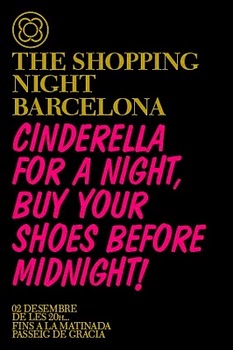 As mentioned previously, Barcelona wanted to celebrate its own Fashion Night Out thus, the first Barcelona Fashion White Night has been organised. The event was initially organised to be held on the 4th of November on Barcelona’s major high street, however given that Christmas is fast approaching it was decided that the date be moved to the beginning of the festive season.

Thus, on Thursday the 2nd of December and coinciding with the Christmas lights switching on ceremony, the main high street, Passeig de Gracia will be hosting this event thanks to some 50 shops that will be opening their doors to the public until midnight, whilst other establishments on Passeig de Gracia will be remaining open until well into the early hours of the morning with exclusive events and parties.

Barcelona Shopping Night is being promoted by the Passeig de Gracia Association of Friends and the Spanish Retail Association, in collaboration with the fashion magazine, Harper’s Bazaar and the Barcelona City Council. Although the event is open to the public in general, anyone wishing to buy something at any of these shops will have to take out a Shopping Passport, a small booklet supplying the addresses of the shops that will also come in useful for the "Gimcana de les Flors", which is none other than a game whereby for every euro spent at one of the shops taking part in the shopping night, buyers receive a flower-shaped stamp, and as they accumulate these, they will be entered into lotteries to win cruises, ski- resort holidays, and nights in luxury hotels.

These passport booklets will be available at specialist information points. So, now you know, the idea is to spend as much as you can, have fun, and if possible get lucky and win one of these luxury prizes. However, Fashion White Night in Barcelona goes beyond shops opening until midnight, special activities and shows are lined up to attract clients to the event, such as DJ sessions, and a week of sculptures from the artist Eladio de Mora (dEmo) set up on Passeig de Gracia, in addition to show rooms from independent designers.

So, all you shopaholics out there that feel like doing some serious shopping on the most prestigious high street in the city, as well as partying until the early hours of the morning, you have no excuse not to attend this fashion event in Barcelona. Now you know, so head down to the Barcelona Fashion White Night on the 2nd of December.