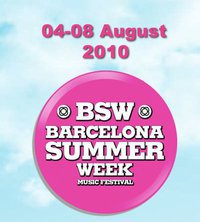 Barcelona wants to become the ultimate world benchmark for dance music, and to prove it this weekend presents two festivals which pursue the same aim, to make people dance and which together provide one of the most comprehensive and cutting-edge line-up of the current scene .

As mentioned on a previous blog, on 6 and 7 August it will be held the Barcelona Music Conference, but a couple of days before kick off the Barcelona Summer Week. This festival celebrates its second edition in open air and closed premises offering the cream of the dance scene with the top international DJs.

With over 100 performances the BSW aims to exceed the previous edition, when 50,000 festival-goers flocked to the call of the numerous and illustrious DJs who participated in that edition. This year the performances will be distributed at venues such as the Atlantic Club, the Solo club, Otto Zutz, Oasis Bcn or the Catwalk. To these premises are added impressive free parties to be held in the Beach Bar at Bogatell on Wednesday 4th and Thursday 5th August, where DJs such as Sir Fabian Salvador & Lady, as well as Felix JR will play respectively.

The bulk of the activities will be concentrated on Friday and Saturday at the Palau Sant Jordi and the Sant Jordi Club. With the aim to exceed last year’s edition, this year’s line-up includes performances such as Ferry Corsten, Funkerman, Bingo Players, Booka Shade, Eric E., Noise Up Yall, David Hopperman, DJ Sneak, David Oleart, David Penn, Frank Morin, Maurizio Gubellini and national DJs such as Javi Mula, Joan Reyes and Sergio Perez, among many other distinguished and acclaimed DJs.

Everything to make you dance to the beat of the most current and innovative dance music in a festival that brings together the elite of the international and national music scene. The bulk of the sessions fall within the Friday and Saturday tickets, while the performances hold at the Atlantis clubs, Row 14, Solo, Otto and Oasis Bcn cost between 10 and 15 euro.

This August you don’t have any excuse not dance to the rhythm of the best Djs playing in the many dance floors spread over this city, because in summer is much more than beach.