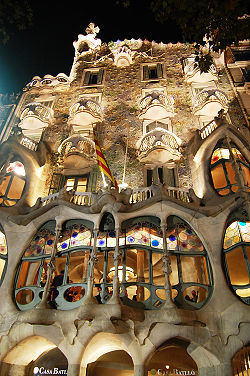 We are present in some of the most popular destinations in the world and every city has something that makes it unique attracting thousands of visitors every year, whether its the monuments, beaches, culture, the gastronomy, or a whole combination of things. We have to say though that our most popular destinations are without a doubt New York, the largest and one of the most popular destinations in the United States, and Barcelona one of the most visited cities in Europe, and first most popular tourist destination in Spain. There are many different reasons for this being the case however, there is one thing that both these charming destinations have in common and that is their architecture. How can you compare these two amazing but extremely different cities? You can’t, because both are on completely different scales, however there is one thing that Barcelona stands out for and that is its amazing unique contemporary architecture, which could definitely give New York a run for its money.

A building form closely associated with the city is the skyscraper, New York having accumulated the largest collection in the world. The city has architecturally significant buildings in a wide range of styles including early Gothic revival namely the Woolworth Building , Art Deco with the famous Chrysler building, International style architecture with the Seagram building, and finally green design in American skyscrapers, the Condé Nast building being an important example of this.

However, it doesn’t just stop there there as the architectural variety of the stunning buildings in the city is reflected right down to the New York housing and residences including examples of Art Deco in Greenwich Village, and more importantly in Soho, which can boast as being home to the greatest collection of cast-iron architecture in the world comprising a pretty combination of Italian and French architectural designs. You will see evidence of this in the New York apartments that we offer with some stunning examples of the architectural diversity in the Big Apple.

Although New York can boast of some of the most stunning examples of all kinds of architectural design, in addition to the largest number of skyscrapers in the world, sometimes bigger isn’t always better. And, can this American city boast of having won the 1999 RIBA Royal Gold Medal for its architecture? The first and only time a city itself, and not an individual architect, has won the award. Has it been dubbed the capital of Modernism? In addition, Barcelona has a vast history of architecture with many buildings in the Gothic district dating back to Medieval times and sometimes the Roman Settlement, is home to several World Heritage Sites, including the famous unfinished Basilica of the Sagrada Familia, and is home to the legendary Spanish architect Antoní Gaudi who greatly influenced the face of this beautiful city and left an impressive legacy of his unique contemporary architecture. If he was alive today I’m sure he’d be proud.

In the various districts in Barcelona there are an abundance of examples of the prevailing architectural styles in the city. The Eixample district, which can boast of some of the most beautiful Art Nouveau buildings in the city, is a great example with the original features of these spacious apartments having been preserved, including the high ceilings and beautiful mosaic tiled floors. It goes without saying that we have a large variety of Barcelona apartments with some stunning examples of all these architectural features, in the various districts of Barcelona..

So there you are. Two totally different cities with a completely different style, but as equally as popular. If you can’t decide which you like best, why not visit both?