Berlin lights up: The Festival of Lights 2012 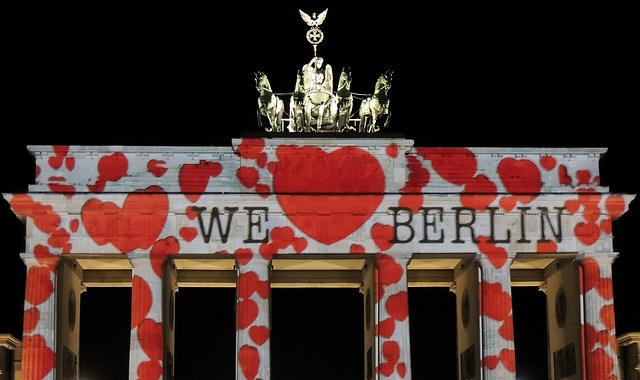 From the 10th to the 21st of October, Berlin will shine with a special kind of brightness… More than seventy monuments, streets and squares of the German capital will be seen in a new light thanks to the illuminations of the Festival of Lights 2012.

The festival will bring together German and international artists and designers to dress the most famous monuments and historical buildings of Berlin with spectacular veils of illuminations. The Brandenburg Gate, the cathedral, Gendarmenmarkt, the Television Tower… all these will, between 7 pm and 12 am every night, fall under the creative spell of the lights and their striking incandescent designs.

The main site of the event will be Potsdamer Platz, where on the 10th of October at 7.30 pm, after a large countdown, the Festival of Lights will be opened and the artistic illuminations will begin to flood through the whole city, filling it with surprising forms and colours.
The Festival of Lights, a shining showcase of dusky art, will make it possible to discover Berlin in a different way. All the lights can be seen for free simply by going for a stroll through the streets, although if you prefer different tours are also organised to allow you to contemplate the lights from a tourist bus, a boat, a limousine, a hot-air balloon or a horse-drawn carriage.
The Berlin Festival of Lights is always accompanied by a large variety of cultural activities: jazz concerts, after-dark entrance to museums and buildings which are normally closed at night, a nocturnal marathon, and even fireworks. One piece of advice, however: if you’re into fireworks, better to head to Berlin during the Pyronale from the 1st to the 9th of September and you’ll be able to see the sky explode into colour.

In past editions, the Festival of Lights has received more than 1.5 million visitors, making it an event of International interest which, since its birth in 2003, has inspired other cities to create their own lights festivals.

You can find more information about tours, participating artists, the buildings which will be lit up this year and everything else on the official website of the Festival of Lights.
While I start packing my bags and making bookings, I’ll leave you with the official video of the Festival of Lights. This way, you can get an idea of what awaits you this October in Berlin. Just one more word: spectacular.
Laura – Marketing Team
Posted in Events, General
Laura