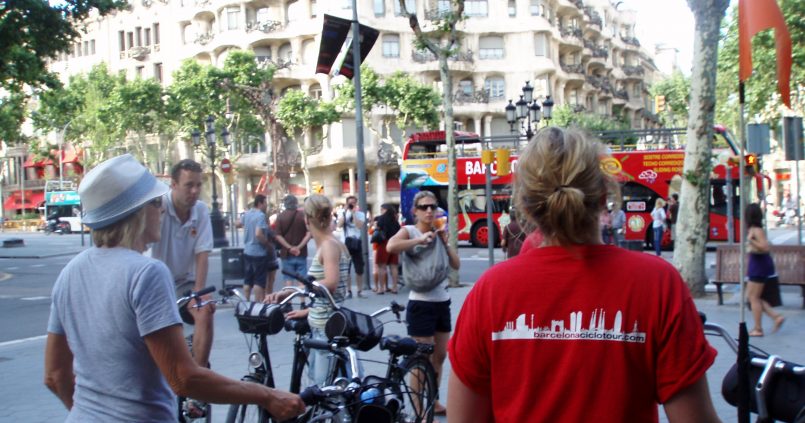 Last week the team of Friendly Rentals had the pleasure to enjoy a fantastic tour with Barcelona Ciclo Tour that took us through the streets and the most important sights of the city. During this tour our guide was Mirjam, with several years of experience in these activities, and who helped us to understand a little more the history and personality of Barcelona.

The weather was perfect and our group was made up of tourists from different nationalities and of all ages, a fact that wasn’t an obstacle at all because the bicycles were of excellent quality and our guide led us through the streets of Barcelona at a very comfortable pace, that even those not used to riding a bike could keep up with.

The tour kicked off in the vicinity of the Cycle Tour office in the heart of the Raval district, where we were given our bikes and a bottle of water to quench our thirsts during any of the many stops during the tour of Barcelona.

Our Dutch guide was well acquainted with the stories and idiosyncrasies that characterize Barcelona and this was reflected in the various stories she told us on the road. For example, the story of Botero’s famous cat at the Rambla del Raval, or the debate we had at the Town Hall Square, where Mirjam talked about the Catalan identity, something that the vast majority of foreigners who come to enjoy the beaches, food and architecture of Gaudí didn’t know, but which is also part of the idiosyncrasy of Barcelona. All with a perfect English and a friendliness that contributed to make us feel more comfortable and made the city tour relaxing and enjoyable.

Then we made a strategic break at the beach, where we could relax and admire the beauty of the coast of Barcelona, while we had a refreshing drink, included in the Ciclo Tour.

Then we went on with the tour that took on a the theme of Gaudí architecture, where we stopped at the Sagrada Familia, where Mirjam explained to us part of the history of this cathedral, still unfinished; and with touches of humour and irony she gave us some hints on current affairs from Barcelona, very useful to understanding the Catalan city.

Our next destination was the Casa Mila and Casa Batlló, where Mirjam explained the story of San Jordi, a legend of Barcelona which is present both in its traditions and in some of the most important examples of architecture of Barcelona.

And then our return home! The bike tour lasted around three hours. We thoroughly enjoyed cycling on the streets and seeing the most important sights of Barcelona while listening to the fantastic explanations provided by our friendly guide of Ciclo Tour. A highly recommended activity for tourists and non tourists alike who would rather use the 2 wheeled alternative to the bus or underground to see the sights of Barcelona, and now the weather makes it even more appealing and it’s even a good way to burn off a few calories!