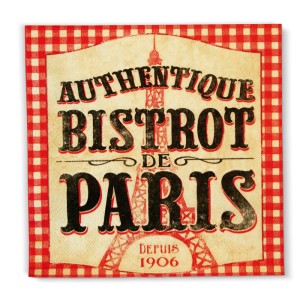 The bistrots of Paris

In Paris, eating out in a restaurant from time to time is almost considered to be something of a fundamental human right. That’s why the French invented the bistrot – a low-cost eating establishment where any Frenchman can get his petit salé, a bit like a cheaper, less snooty version of a restaurant. Bistrots in Paris abound, meaning you’ll need to take our handy guide with you when it comes to sorting les hommes from les garçons.

L’AVANT GOUT – L’Avant Gout is head cheffed by Christophe Beaufront, who is, as described on the bistrots website, a ‘passionate’ man. Like all the best creations, this restaurant doesn’t look like much from the outside. The bistrot is famed for its pot-au-feu de cochon (a bit like a pork one-pot), but other dishes such as the duck carpaccio are equally good, we say. Where: 26, rue Bobillot (13th arrondissement).

ALLARD – You can’t walk far in the district of Saint-Germain before stepping into a bistrot. Allard was recommended to us as providing a typically French experience, and did not fail to disappoint. The coq au vin was particularly recommendable, although be prepared for the fact that the service is (stereo)typically French as well. Where: 41, rue Saint-André-des-Arts (6th arrondissement).

LE BISTROT PAUL BERT – Set in an attractive retro environment in the trendy district of Bastille, Le Bistrot Paul Bert couldn’t help becoming something of a reference point in the local area. This Paris bistrot has substance as well as style, however, and consistently provides excellent dishes, accompanied by an inspired wine list. Where: 18 rue Paul Bert (11th arrondissement).

A LA BICHE AU BOIS – Set in the (relatively) humdrum shadow of the Gare de Lyon, A la Biche au Bois does in a low-key, unassuming way what the flashier joints right in the centre of Paris can only dream of: provide excellent, genuinely French cuisine, to a crowd mainly made of up locals. Try the boeuf bourguignon, although be prepared not to be able to move for some time afterwards. Where: 45 avenue Ledru-Rollin (12th arrondissement).

LE PETIT PICARD – This little bistrot in the colourful, central Marais district is always full, and there’s a good reason why. Night after night, and day after day, it provides superb value and generous portions in a cheerful and cosy setting. Highly recommended. Where: 42 de la Bretonnerie (4th arrondissement).

A set menu in all restaurants featured costs around € 35 at time of writing.

Posted in Paris, Where to eat in Paris
Marketing Team