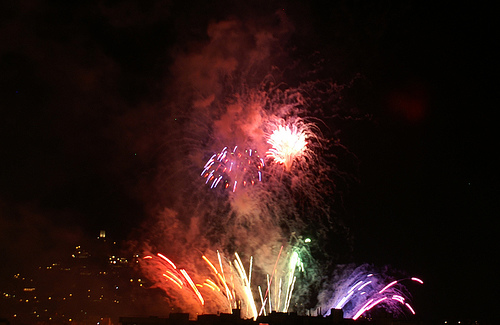 Every year, during the month of July, the sky of Blanes, is lit up with scandalous colours, explosions and serpentine forms. These lights in the sky don’t have anything to do with mysterious forces or alien spaceships, but the 5,000 kg of gunpowder which are catapulted into the sky to celebrate the "Focs de Blanes", a spectacular fireworks competition.

The Blanes Fireworks Festival 2014 will be celebrated from Thursday the 24th to Sunday the 27th of July.

In this coastal village, close to Barcelona, the fireworks have more than a century of tradition behind them. The competition only began to take place in 1970. Currently, the Blanes Fireworks Festival is considered one of the most prestigious fireworks festivals in the world. Each year, national and international pyrotechnical organisations compete against each other,vying for the honour of being the winner of the Fireworks Festival.

The fireworks are set off from the Sa Palomera rock, which is in the middle of Blanes Bay. This point marks the start of the Costa Brava in the south. The fireworks display begins at 10:30pm everyday of teh festival. We recommend arriving early if you want to find a good spot at an outdoor bar or café along the seafront or on the beach.

How to get to Blanes from Barcelona

In car, you can take the Autopista del Maresme (C-32) or the N-II highway, direction Girona. You can get onto both from the Gran Vía in Barcelona. During the Blanes Fireworks Festival, free parking zones will be opened up.

You can also get to Blanes by train (using national train company RENFE, line R1) or bus (company Sagalés, lines 601-603-620), but depending on return times this might be more complicated.