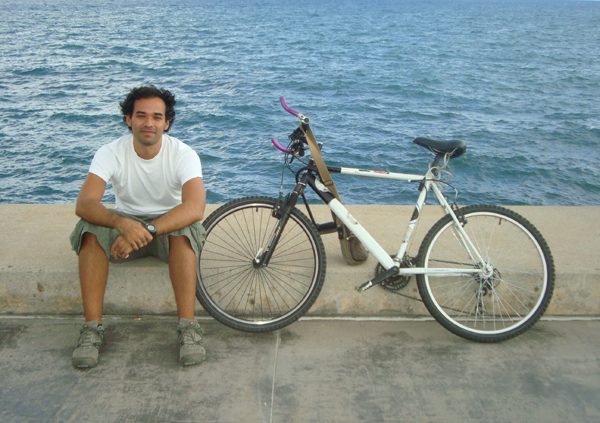 We go on with the initiative of giving voice to different highlighted bloggers within the tourism and travel area . Now it is the time to interview Eddy, who offers in his blog many pieces of advice as well as useful and specialized information on this topic.

It was right after a creativity crisis when I started to write DestinosActuales.com (Current Destinations) in October 2008. I did not feel 100 % fulfilled with my job and that is why I needed to be exited with my own project. Previously, I attempted twice to create a blog without success. Finally, this last one got off the ground like a site whose main purpose would be putting together two different passions and turning them into one: writing and the pleasure of travelling and getting to know hundreds of different places. A pleasure consisting of pretending to be those citizens inhabiting any corner of the planet, learning from them and finding out that we are not unique and that one of our main values is the diversity of our thoughts, our cultures and lifestyles.

Months later, my colleague from Buenos Aires joined the blog, since then, she has become the main base of Destinos Actuales in South America. After that, another blogger started to collaborate with us, Santiago Hidalgo, who through his camera and video camera searches the best angle to discover many of the destinations he is constantly travelling around.

2) Barcelona Top 3. The 3 places that should not be missed

It is a small green lung from Barcelona that offers some incredible sights to the city. It is a very nice place to get away from the tourist and daily hustle and bustle of the city.

– Gràcia and the Festa Major in August

The district of Gràcia definitely possesses a charm no visitor should miss. When you get to know Gràcia you can feel part of the essence of this city, I truly recommend discovering this district, starting from Gran De Gràcia Avenue and getting lost in their narrow streets. The popular festival of the district in August is unforgettable. If you are a visitor you feel like a local citizen, while if you are already living in Barcelona it makes you feel like if you were discovering the city for the first time.

– Going by bike through the Gothic district and the Borne

When I am asked about the best means of transport to get to know Barcelona, my reply is always the same: walking and riding the bicycle. Even though, Barcelona cannot be compared to Amsterdam or Berlin, since their habit of using the bicycle is more consolidated, I always recommend discovering the city by these means. There is nothing better than making use of a summer or spring afternoon to go deep into the Gothic District and the Borne without any planning, since Barcelona will always delight you with the best place to find.

3) A hidden secret about Barcelona

The Enric Granados Street (between Diputació and Consell de Cent). In my opinion, this street is one of the most attractive of Barcelona, it begins right behind the University of Barcelona and it is only for pedestrians. The whole street is full with super cool bars and terraces, a fact that makes it an oasis right in the centre of the city.