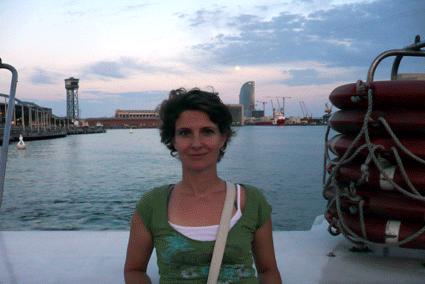 This week we have been privileged enough to interview a very special travel blogger. Stephanie Pick, a German art historian that has been living in Barcelona for 9 years has given us a lesson in the history, art, and gastronomy of this fabulous city which would we like to share with you. So, pay close attention to her advice and suggestions from in-BCN if you want to learn more about this fascinating town.

Barcelona captivated me right from the beginning. Every day I learn something new about this vibrant city with its varied history and unique personality. Contemporary art is one of my passions and in this respect Barcelona has a lot to offer. That’s why I carry out specialised tour guides so I can share my knowledge and passion with other people. However, I wasn’t entirely satisfied just doing that so in May 2009 I started my own blog www.in-BCN.de, where I write about art, culture, and delicatessen in Barcelona. And, why in German? The answer is because there are already so many really good blogs written in Catalan and Spanish about art and culture in Barcelona, in addition to the fact that German is my mother tongue.

The CCCB, or the Museum of Contemporary Art Barcelona that hosts exhibitions, festivals, and cultural activities jam-pack full of entertaining and exhaustive social criticism and cultural history. This art centre is definitely not one to miss.

The Sagrada Familia cathedral, Gaudi’s masterpiece and a clear expression of all the ideas and experiences that influenced this Catalan artist. It is obvious that the singularity of the Sagrada Familia was influenced by his home and the Colonia Güell church. Gaudi grew as an architect with this project and it ended up becoming his obsession. The Sagrada Familia museum has helped to understand the incredible merit that lies above all upon the statics that he constructed and not in the decoration and its original shape, like many believe. The forms were not constructed for aesthetic reasons but more the aesthetics of the form had a function, which emerged from his unique experience with nature. In any case, the rest of Gaudi’s architectural legacy including Park Güell should not be missed.

La Placa Sant Justwith the dominating sensation of being immersed in Barcelona in the medieval times again. With its patrician palaces, small workshops, gothic fountains, and the magnificent church that stands majestically in the square, this corner has a very special charm. The Sant Just I Pastor Church, as a tribute to two Christian martyrs, is one of the oldest churches in Barcelona, and in fact was the city cathedral for a time. It is of course worth a visit, and is a very fascinating building thanks to its charming interior, in part to the ancient tombstones, and also thanks to the sacred works with their unusual relics with motifs of purgatory, that date back from the XIX century, as well as its ostentatious altarpieces from the XVI.

3. Your secret place in Barcelona

La Báscula, a restaurant situated right in the heart of the Borne district has a special charm. Its magic resides firstly in its name that was taken from the industrial scales that were located in the chocolate factory that previously occupied this space. However, on the other hand the food on offer is mainly vegetarian and has a very special South American touch that lends it its unique charm. And I haven’t even mentioned the menu with its vast variety of drinks (fruit juices, tea, milkshakes, etc.) and home made desserts that make this the ideal place to spend some time with your friends for a chat and simply to enjoy the magical atmosphere. So, take your time!