Bo-Kaap, a district full of colour in Cape Town 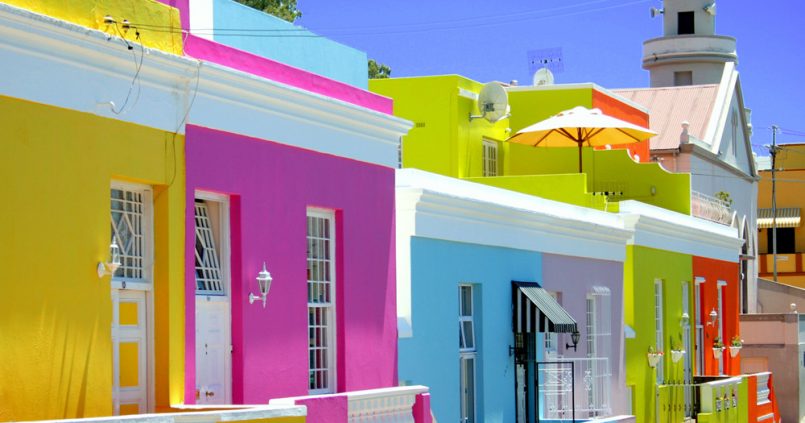 A walk through Bo-Kaap, the district full of coloured houses

Cape Town is one of the most striking cities in the world. The contrast between the paradise-like beaches and the towering silhouette of Table Mountain, surrounded by exuberant natural vegetation, is a feast for the eyes.

Of all the districts of Cape Town, there is none which makes your senses come alive quite so much as Bo-Kaap, a neighbourhood full of bungalows painted in vibrant colours, which is paved with cobbled stones. It’s the perfect place to take a stroll, in which the yellow, turquoise, orange and fuscia houses compete with the mountains to attract your attention.

Bo-Kaap is a decidedly multicultural neighbourhood, rich in history, which sprung up during the 16th and 17th centuries. At this time, Cape Town was an important port city, used for docking merchant ships travelling between Europe and Asia. The Dutch traders, who at that time controlled a large part of the city, brought with them large quantity of slaves from Asia, especially from Indonesia and Malaysia. This largely Muslim people set up base in Bo-Kaap. Over time, and especially after the abolition of slavery in 1834, they grew to become artisans and shop-keepers, creating a neighbourhood full of vitality and awash with colourful houses, spice shops and original mosques. Currently, their descendants are known as the “Cape Malay”.

The museum of Bo-Kaap is situated in one of the oldest houses of the neighbourhood. It contains beautiful furniture and rooms decorated in typical style of the 19th century, which allows visitors to discover the day-to-day life of a Malay family during the era. It’s open from Monday to Saturday, from 10am to 5pm.

Furthermore, in this area there are various shops which contain typical products and foodstuffs, as well as numerous restaurants where succulent and richly seasoned Malay food is served. Bo-Kaap is one of the most picturesque and appealing districts of Cape Town, and one to be enjoyed by all the senses. Don’t miss it!