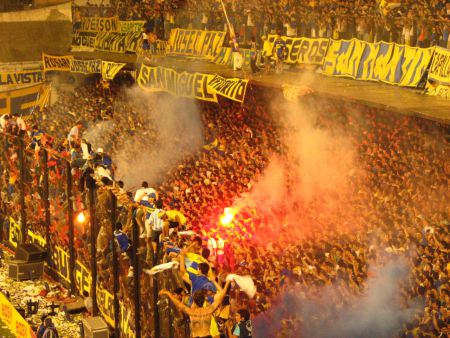 Argentineans are a passionate bunch; they love their meat no matter what part of the animal it comes from, the seductive steps of the tango and the strangely addictive mate tea. But all of these combined don’t even come close to matching the fervent religious like passion felt for football in Buenos Aires. Which football club is the best? Who has the most passionate supporters? How many football clubs are in Buenos Aires? All these questions and more will be answered below.

Boca Juniors- This is the club which launched the career of one Diego Maradona. Playing in the distinctive blue and yellow Boca Juniors has won the First Division title 30 times and many international titles. Fans of Boca Juniors crowd into ‘La Bombonera’ (chocolate box) stadium 49,000 strong to cheer on their team. The atmosphere in the stadium is electric especially when they take on cross town rivals River Plate. When the fans start to jump the stadium begins to tremble which has led to the phrase, “the Bombonera doesn’t tremble, it beats”.

River Plate- While Boca may be the most popular football club in Buenos Aires it is by no means the oldest or most successful, that honour belongs to River Plate. While not as successful in recent years their rivalry with Boca is legendary and the local derby is one of the most passionate in the world. In fact it is on the list of sporting events to see before you die. Wearinig the distinctive white with diagonal red stripe they play in ‘el Monumental’ stadium which also happens to be the largest in Argentina.

Getting a ticket to watch these two clubs is difficult but not impossible. The only game which would be impossible to get tickets to see is the derby. If you do manage to get tickets to see a football match in Buenos Aires you will be rewarded with an understanding of the passion which unites Argentinean football supporters just as much as their team colours divide them.

If you can’t get tickets into see the big two other football clubs in Buenos Aires, you may have more of a chance to get tickets to see Racing Club, Independiente, San Lorenzo de Almagro or Vélez Sarsfield.