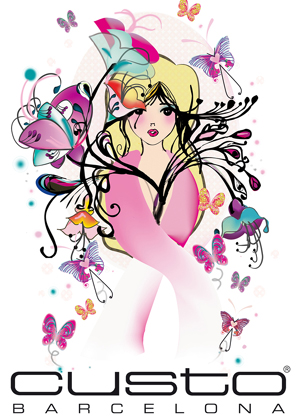 We’ve talked before about unique brands that have emerged in cities such as Barcelona , London , etc. The Catalan capital is characterized by a very active creative fertility and as so it deserves more space in this matter, what make us re-direct our attention to Barcelona in order to talk about two very well-known fashion brands that have catapulted the fashion scene in this city; they are Custo Barcelona and Desigual.

Custo Barcelona began its career in the early ’80s, when Custo Dalmau began a very personal career in fashion, creating shirts for men based on colours, designs and intense patterns that called the attention because of its strength, but also for their quality and originality. At the beginning, the expansion of the brand counted with the support, management and distribution of the Catalan company Meyba. However, after years Custo decided to start an adventure by himself and so enjoy all the possible freedom.

His popularity in the United States was such that celebrities from TV shows like Friends or Sex and the City wore their clothes, and his success confirmation came in 1997 when Custo Barcelona was invited to the Spring / Summer Fashion Week in New York, where he captivated the audience and press with the original, casual and groundbreaking style.

Since then, Custo Barcelona has not stopped growing and now this brand counts with over 3,000 stores spread across the world, being its main focus the American market.

Custo Barcelona desings currently a full fashion line. The motives are characterized by patterns of flowers, animals, Japanese iconography, Indian imagery, and recently they have evolved into the patchwork and stripes.

The other large brand from Barcelona is Desigual.

Founded in the Catalan city by the Swiss Thomas Meyer back in 1984 with the idea of creating some casual, positive and quality clothes, it has been growing under the concept of fun & profit, giving rise to a brand which follows a philosophy reflected in the different slogans that have been used throughout its history, such as: Life is cool, Real Life, Magic stories, Luxury Feelings, Better & Better, Wow, etc.

These values distinguish the brand from the competition, since it is based on positivism, joy, free-and-easy, excitement and complicity. The customers feel in this way totally identified with the brand’s principles, in their mutual search of being different.

The clothes they design are very original, manufactured on the basis of assembling different materials, which provides with its identity; so that you feel original without losing the quality and exclusivity this brand guarantees.

In this post you will find information about the outlets of Desigual and Custo in Barcelona. Enjoy!