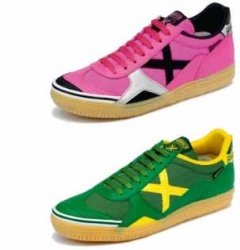 Catalonia is one of the most creative and productive regions of the peninsula, and as such has given rise to some of the most Spanish international brands, such as Chupa Chups, Danone or its very well-known football team, Barcelona Football club. But its frenetic inventiveness is not limited to the examples given above, but is also reflected in fields such as fashion and more specifically shoes. If we want to understand this creativity, we have to go back to the creation of the typical espadrilles. These sandals have a canvas or cotton fabric upper and a flexible sole made of rope or rubber material and are original from the Pyrenees. All this mastery is embodied in two legendary brands from Barcelona, the Munich and the Maians.

The Munich shop is principally engaged in the manufacture and distribution of sneakers. At the beginning it took the same name as its founder, Berneda, who at the end of the Spanish Civil War dedicated his efforts to the manufacture of shoes for the practice of rugby and handball. However, subsequently they began to diversify its production and now they have ventured into the casual shoes market. Their success is based is their unique brand image and their distinctive symbol, the X shaped. Nowadays, Munich is well established in the market for sneakers and counts with branches in several countries worldwide and continues to expand its number of stores in Spain. Furthermore, they expect to land in the Latin American market. These shoes are hallmarks of Barcelona and through its website users who are interested can even design their own shoes following a multitude of patterns and colours, with the assurance that the factory in Vilanoia d’Espoia has the order ready in two weeks. Munich is an example of a company that has managed to position itself in an increasingly competitive market. Munich started as a family business to later focus its manufacturing into a unique design aimed to colour lovers who appreciate the originality and quality of a completely Spanish production.

Another benchmark from Barcelona is the brand Maians. The name of this company is a declaration of intent, since this was the name of a sandy island located a few hundred meters off Barcelona. Because of the construction of the first port in Barcelona in 1477, the island was absorbed by the city, leading to the legendary district of Barceloneta. District of surfers, swimmers, fishermen and locals, the Maians represent and pay tribute to the traditional style of they typical Spanish"grandfather". Thus, they follow a strict manual manufacture, 100% Spanish and with names of people from the neighbourhood, like Eugenio, Jacinto or Amador. The Maians have cleverly managed to combine traditional with modern design, creating a vintage brand, essential part of your wardrobe, because of its design and comfort. Wear this summer a pair of its moccasins, espadrilles, deck shoes and sandals.