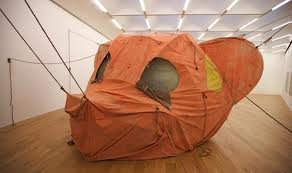 The British Art Show, a touring exhibition that takes place every 5 years, has finally returned to London after 20 years! Hurrah! The show, which showcases the very best of cutting-edge contemporary art in some of the most influential galleries in the country will thus be holding an exhibition from the 16th of February to the 17th of April 2011 in the Hayward Gallery, London. 39 artists will be participating in this prestigious event, and artwork produced over the last 5 years will be on show demonstrating the wealth of talent of artists from all over the country who have created pieces and brand new works especially for the project.

Widely recognised as the most ambitious and influential exhibition of contemporary British art, in their own words, British Art Show “explores the way in which contemporary British art conjures histories, distant or near, longingly imagined or all too real- to illuminate our present moment”. Furthermore, this year’s show is focusing on a new angle and attempting to move away from simply showcasing various works. Thus, a distinctly curatorial focus to British Art Show will be on the cards, and featuring the usual mix of sculpture, painting, installation, drawing, photography, film, video, performance but set around the subject of the subtitle, In the Days of the Comet.

The theme of The Comets explored throughout the British Art Show 7 London exhibition features artists alluding to the astronomical phenomenon in various different ways. With references to the measuring of time, historical recurrence and parallel worlds, comets are also depicted as the harbingers of change, which neatly fits in with the changing nature of this year’s exhibition, as it moves from city to city with new works revealed at each destination on the British Art Show 7 tour.

Several well known artists are included in the new British Art Show touring exhibition, with the likes of Keith Wilson with Calendar, Luke Fowler with Accidential Double Exposure II, Steven Claydon with the Germs of Things Permitteth not their Rupture or Decrease, Emily Wardill with Game Keepers Without Game and Elizabeth Price with Welcome (the Atrium).

Times: 10am – 6pm from Monday to Sunday (apart from late night opening on Friday until 10pm).

By bus: Buses stop on Waterloo Bridge, in York Road, in Belvedere Road and in Stamford Street.

Where to get tickets: call 0844 875 0071, click here to book online, or you can purchase tickets at the ticket office itself.

Posted in Art and Museums in London, London
Marketing Team