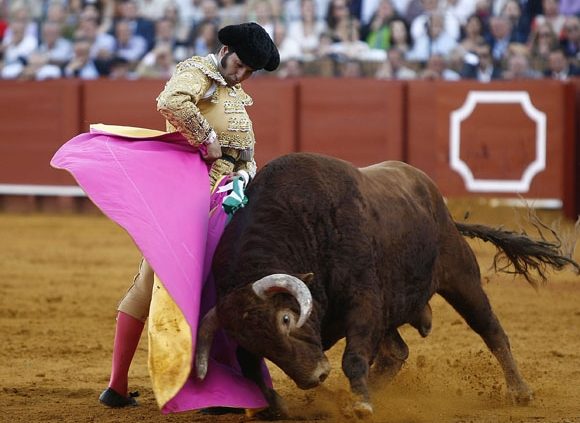 Bullfighting is something which raises passions in Spain. For some it is a bloody, tortuous spectacle in which the toro bravo has no chance of survival against man, sword, horse and cape. For others it is a majestic art in which man’s bravery is pitted against the bulls in an even contest. Whatever you may think, bullfighting in Seville is a tradition and the Plaza de Toros de la Maestranza is one of the best venues in Spain to watch the event.

Each corrida de toros ( an afternoon a bullfights) three matadors (bull fighters) fight against two bulls each making six bullfights in total. A normal bullfight is divided into tercios ( thirds). The first tercio is when the bull and the bullfighter size each other up. The bullfighter uses his cape to avoid the bull as it charges, the bullfighter picks up on any quirks the bull may have. At the end of this stage the picadors are allowed into the ring. The picadors mounted on a heavily protected horse, take up position on either side of the ring. The bullfighter draws the bull towards one of the picadors, who meets the bull’s charge with a lance, which he sticks into the muscles on the bulls neck, weakening it and preventing the bull from raising his head.

The second tercio is the suerte de banderillas, where the bullfighter’s assistants challenge the bull to charge them. During the charge the banderilleros place two flags into the bulls back, more or less the same place as the wound from the lance. In total six banderillas are placed into the bull.

The final tercio, the suerte suprema, is when the bull fighter shows his skill with the cape he lets the bull charge and pass close to his body, the horns passing dangerously close to the bullfighters legs. After several passes the bullfighter coaxes the bull to charge him one last time during this charge the bullfighter plunges a sword through the bull’s shoulder blades into the lungs, effectively killing the bull.

Unless you are completely sure about witnessing a bullfight in Seville, then the best is not to go. It is a cruel and bloody spectacle definitely not for the faint hearted. If you do decide to go, go with an open mind and reserve your judgement until you have witnessed the fight in its entirety, there are moments of beauty and grace in every fight.

The bullfighting season in Seville is a short one with most fights occurring during the Feria de Abril and the month of May. Bullfighting in Seville stops during the hottest part of the summer and resumes again in late September for the San Miguel fights. There are occasional fights which occur during June and August.

Tickets for the bullfights in Seville can be bought from one of Seville’s most emblematic sights the Plaza de la Maestranza. Seating is divided into sol ,sol y sombra or sombre. The cheapest tickets are usually sol but you have the disadvantage of looking into or sitting under the baking Andalusian sun. Sol y sombra gives you a bit of sun and shade as the sun moves, tickets here are usually mid range. The best option and most expensive is sombra (shade). Ticket prices can be found here.