Butrón Castle, a romantic dream in the Basque Country 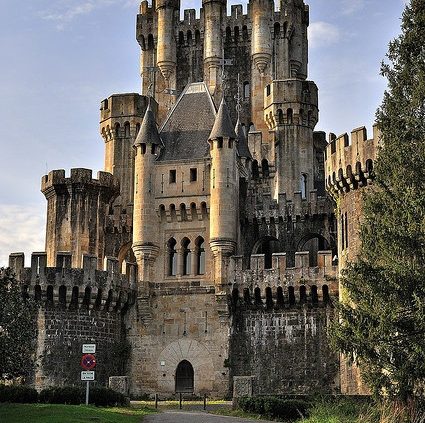 The History of Butrón Castle Butrón Castle, built on a hill and surrounded by hundred year old forests, seems to be straight out of the pages of one of those fairy tales our parents use to read to us before we went to bed. It is located in Gatika, Vizcaya, only 20 kilometers from Bilbao. If like me, you are a fan of movies featuring knights, sword fighting and castles, then a day trip to this castle is a must.

The Butrón Castle is one of the most remarkable fortresses in the Basque Country. Solid and imposing, with thick stone walls and whimsical shapes, it stands out from the green landscape.

The history of the castle can be traced back to the 11th century when a typical medieval tower was built on top of house Butrón. In the 14th century the tower was transformed into a castle and for more than 300 years was the scene of bloody battles between the local noble families. During the so called War of the Bands, the nobles of the region chose one of the two sides: Gamboínos and Oñacinos. The confrontations didn’t end until the 15th century, when the Catholic Monarchs enforced peace, but some of the legends forged during that era still live on.

At the beginning of the 16th century Butrón castle was abandoned and begun to slowly fall into ruins. It was remodelled in 1879, under orders from Narciso Salabert y Pinedo, Marquess of Torrecillas. Francisco de Cubas was the architect in charge and he completely remodelled the castle following the neo-gothic style common in the region of Bavaria. Battlements, spires, towers, windows,…of the original fortress only the ground floor and some of the defensive towers have been preserved. Butrón castle and the gardens filled with palms and exotic plants were used as a hotel for many years as well as hosting weddings and medieval jousting shows. But those times have passed. Currently the castle is closed until a new owner is found and the public can only wander around the outside of the castle. Still it makes an excellent day trip from Bilbao and in the surrounding area you will find a number of pleasant walks and good places to eat.

Butrón Castle is 20km from Bilbao. The best way to get there is by car. Take the BI-3121 towards Mungia.