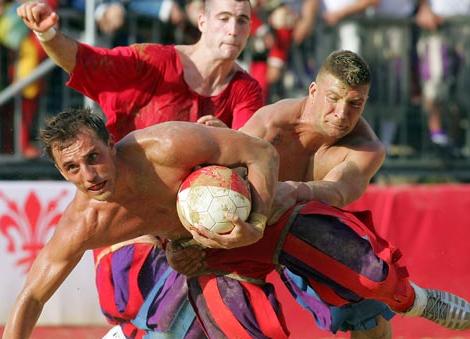 Have you ever wondered what football was like in Ancient Rome or in the middle Ages?

Even though the so called king of sports as we know it today was born in the 19th century its origins are much older. In Florence you can discover it thanks to the calcio storico fiorentino.

Calcio Storico, under the name “harpastum” was a sport which was practiced in the military camps of Ancient Greece and Ancient Rome to keep the soldiers amused and in good shape. During the Renaissance the game became popular amongst aristocrats and nobles; the game was so popular even Popes are reported to have played it.

Today it still retains much of its popularity. Every year in Florence a calcio storico tournament is held during the month of June coinciding with the festivities celebrating the patron saint of Florence, San Giovanni. Games are played in the famous Piazza Santa Croce, converted into a stadium and completely covered with sand.

The rules of Calcio Storico Fiorentino

A game lasts 50 minutes and consists of two teams of 27 players battling to score the most goals. A goal or “caccia” is scored when a the ball crosses the opposition goal line. A gaol can be scored using hands and feet.

The rules of calcio fiorentino were first published in 1580 and haven’t changed much since then. It is an extremely violent sport where almost anything goes, tackles, punches, elbows and head butts…everything but kicks to the head and low blows. Calcio storico combines elements of greco-roman wrestling and movements more common to rugby and football. An hour before every game a spectacular parade takes place in the centre of Florence featuring more than 500 participantsdressed in Renaissance costumes, traditional music and flags with the colours of each neighbourhood. At the conclusion of each game there is an enormous open air banquet.

The calcio fiorentino is a heady mixture of testosterone and emotion, a spectacle combining tradition and sport. If you are in Florence this June, don’t miss it! The semi-finals and the final of the San Giovanni Tournament will be held on:

Ticket prices go from 21€ to 52€. So that you have an idea of what calcio fiorentino is, we’ll leave you with this video.