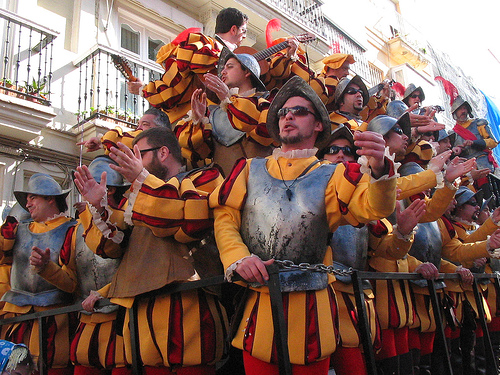 The Carnival of Cadiz is one of the biggest in the world. Thousands of visitors gather in the city allured by the humour, the colour and the cheek of the people and their celebrations. And this year is going to be no different. From the 16th to the 26th of February, the entire city of Cadiz will be transformed into an enormous stage to celebrate this famous carnival.

The Carnival of Cadiz is particularly renowned for the satirical songs which always raise a laugh amongst the crowds even the most serious of visitors. Every year they go over current themes and personalities with lots of humour and irony. Although the Carnival of Cadiz itself lasts around a week, the preparations and rehearsals start around September.

During the pre-carnival time numerous activities are organised including three food events which always attract a large number of locals and tourists, called the pestiñada, erizada and ostionada featuring typical pestiños (fried Christmas pastries) sea urchins and large oysters respectively. Here visitors will be able to eat for free and be the first to listen to some of the groups that will be participating in the carnival competition. This year the Pastiñada will be celebrated on the 14th of January at Plaza de San Francisco, whilst the Erizada and Ostionada will be held on Sunday the 15th of January from 1pm at Plaza San Antonio.

The final of the official contest between the carnival singing groups (Concurso Oficial de Agrupaciones Carnavalescas) is held in the Gran Teatro Falla and marks the beginning of the Carnival of Cadiz. It will be taking place on Thursday the 16th of February this year. The competition is divided into four categories, choir, chirigota (satirical), quartet and the comparsas (serious counterparts to the chirigotas). The categories are established in accordance with the number of voices, singers and instruments featuring in the repertoire. On the same day they will switch on the special lighting adding more colour to the festivities, the spirit and the costumes that will be taking over the city during the carnival.

On Friday the 17th of February, popular flamenco singer Niña Pastori will be giving the opening speech of the Carnaval de Cádiz 2012, the Carnival Goddess and her nymphs will be named, and Cadiz won’t rest until the celebrations are over. Flamenco bars, satirical songs, parades, dancing and fireworks. The whole city will be transformed into a big party, full of colour and rejoicing. A good time is guaranteed.

There are many reasons that the Carnival of Cadiz is one of the biggest and most entertaining in Spain. So go on, head down to Cadiz and experience the carnival fun for yourself!