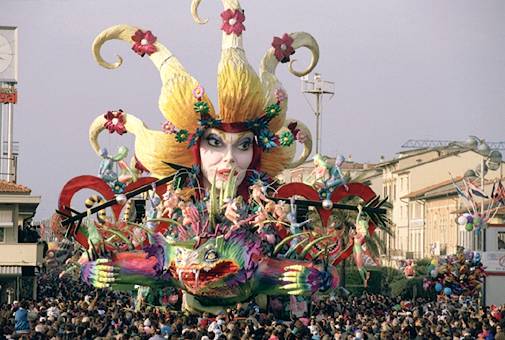 The Carnival of Viareggio is one of the biggest and most entertaining in Italy. It is maybe not as famous as the Carnival of Venice, but the truth is that its every bit as good. We are referring to a splendid carnival with a month of fantastic parades, original costumes and impressive floats.

Viareggio is a small coastal town in the region of Tuscany. The carnival was first set up in 1873 when a group of young people decided to organise a parade with surprising and elaborate floats. The idea soon became a hit. From 1925 they started using papier-mâché to build the floats allowing for very light, mobile and incredibly beautiful creations. The Carnival of Viareggio is currently one of the most spectacular in the world. Its symbol, the Burlamacco, is a mocking clown designed in 1931 by Uberto Bonetti.

In 2012, from the 5th of February to the 13th of March, Viareggio will be getting dressed up in its best for its carnival celebrations. An entire month of celebrations day and night await carnival-goers with political satire, laughs, costume dances, the spectacular floats and an endless number of activities and shows. Fun is guaranteed in this charming city just a short hour away from Florence.

The most eye-catching aspect of the Viareggio Carnival are the parades with floats by the sea in “La Passeggiata” consisting of a 2km circuit that floats of different categories and size go round. They are true works of art and can measure up to 20m high and weigh 40 tonnes with enormous papier-mâché puppets moving in the air. The largest parades have known to feature more than 200 people dressed up, dancing and throwing confetti and sweets into the crowds.

With more than a million spectators every year, the Carnival of Viareggio is one of the most fascinating in the world. Make sure you don’t miss out!

Useful information for the Carnival of Viareggio 2012

Dates: The carnival parades will take place this year on the 5th, 12th, 19th, 21st and 26th of February at 3pm, and 7pm on the 3rd of March. The final verdict will be made following the last parade and a pyrotechnic display. There will be celebrations in different neighbourhoods every night.

Price: Entrance for a day costs 15 euro, children from 11 to 13 years and the military 10 euro, and under 10s free. Discounts are available for groups.

Carnival Museum: Situated in Cittadella del Carnevale (Via Santa Maria Goretti) open Thursday, Friday and Saturday from 4pm to 7pm. The papier maché school is located there and they offer float construction workshops.