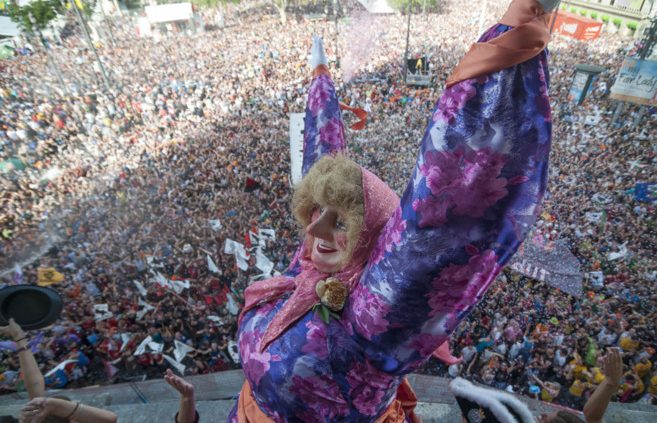 A few days ago, we wrote about Aste Nagusia in San Sebastián (Aste Nagusia means “Big Week” in the local Basque language). Today, it’s the Big Week of Bilbao’s turn, because it’s summer and in the Basque Country, as in the rest of Spain and many other countries, July and August are synonymous with parties!
Big Week in Bilbao 2015 will be from the 22th to the 30th of August, meaning that you can start to get ready for a good dose of partying, concerts and fireworks.

Bilbao’s Aste Nagusia is considered to be one of the UNESCO treasures of Intangible Cultural Heritage of Spain. The fact that it’s organised in conjunction with the town council and groups of residents gives it a very special character and colouring.

Big Week in Bilbao begins every year with the traditional rocket shot (which is repeated every day in the morning; waking up workers, sleepyheads and the hungover in equal measures); and with the reading of the opening address. From this moment, the Marijaia presides over the celebrations from the balcony of the Arriaga Theatre. The Marijaia (the dame of the celebrations) is one of the icons of Big Week in Bilbao, and even has her own song. She’s a doll dressed in traditional clothing and with arms held up high that every year is burned at the end of the celebrations.

If anything will get your attention at these celebrations, it’s the quality of its concerts. Music is one of the most important elements of the Big Week of Bilbao, and the programme always includes everything from rock, pop, folk and classical music to punk, reggae and hip-hop. The concerts of Bilbao’s Big Week 2015 will be in the hands of bands like: Los Secretos, Maldita Nerea, Le Vent du Nord, Rafael Amargo, Lory Meyers, Pasión Vega, Mártires del Compás, Michael Prophet…

The other pillar of Bilbao’s Big Week are the incredible firework displays. Every night, the sky is lit up with shining colours thanks to the International Fireworks Competition of the City of Bilbao. In this pyrotechnical contest, national and international specialists participate in order to see who can offer up the most striking performance. The firework displays start every night at 10.45 pm.

As if all this weren’t enough, there’ll also be scores of circus and theatre performances for all tastes in the streets, children’s performances, typical parades with Basque instruments, sports competitions, chess competitions, traditional dances, culinary contests, workshops and much more. Don’t miss out!