Celebrate the Festival of Sitges 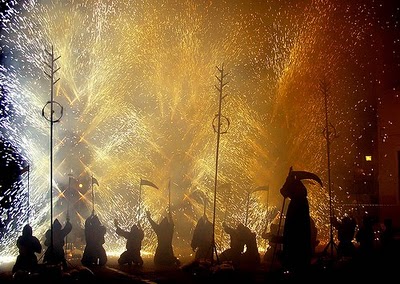 There are many Spanish and Catalan towns that, coinciding with the hot weather, organise the major festivals during the month of August. Similarly the Festival of Sitges will be taking place this August the 21st to the 27th with celebrations that are particularly interesting due to their traditional characteristics.

The festival has been taking place in honour of Saint Bartholomew ever since the 16th Century and has been declared a Festival of National Interest by the Regional Government of Catalonia. On a religious as well as entertainment level, the festival maintains its cultural roots and welcomes a large number of visitors to the event every year.

The celebrations begin with an opening speech and end with a traditional Catalan dance on the San Sebastià beach. The two most interesting days are the 23rd and 24th of August during which most of the traditional events take place, such as dancing, street bands, human towers, fire runs, religious ceremonies, mass and a procession in honour of the Saint that concludes with a spectacular firework display.

The highlights of the Festival of Sitges consist of those events which make it stand out from the rest including the plays and numerous dances that fill the streets of the town with music, entertainment and colour. The most popular dance is the moixiganga, a religious dance portraying the life and passion of Jesus Christ, with amazing human towers combined with cross step dances.

Another one of the more popular dances is that with the giants consisting of three couples who play giant Christians, King James the Conqueror and a lady from the time, as well as giant Moors and giant Americans, which are symbolic to the town and that represent the emigrants that went to Cuba in the 19th Century to seek their fortune.

The dance of the devils, involving Saint Michael, Lucifer, a she-devil and groups of devils, accompanied by drummers, fires and pyrotechnics is one of the most spectacular and fun. As they pass through the streets of Sitges, they throw fire crackers and recite satirical verses about life and people in the town. Another type of animal that dances alongside the devils is the Eagle, which breathes fire through its mouth and the Dragon called the Fera Foguera.

There’s still the typical cane dance accompanied by the dulzaina (instrument similar to the flageolet), the gypsy dance involving dancing around a pole combined with ribbons and funny verses, the Shepherd’s Dance accompanied by bagpipe music, the Cercolet (Small Circle) Dance where children hold coloured circles, the Tambourine Dance, the Spanish Maypole dance and the Big Head Dance, etc.

With all these shows already a permanent fixture of the festival on top of the other activities and concerts organised every year, the Festival of Sitges is not only a great opportunity to have lots of fun, but also to the perfect chance to discover a good part of typical Catalan folklore. Don’t miss out! Fun and tradition is guaranteed!