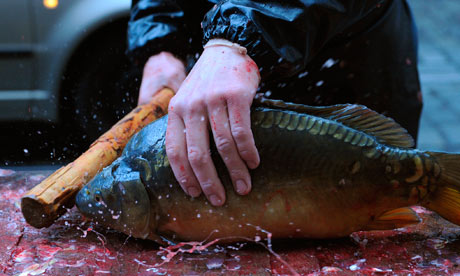 Things to do in Prague during Christmas 2013

If you’ve never experienced it before, Christmas in Prague is a fascinating time. The City of a Hundred Spires fills with carol singers, markets, ambient light, bowls of giant fish… Intrigued? Read on, as we take a look at some of the best activities on offer during Christmas 2013 in Prague.

CHRISTMAS MARKETS– The two biggest Christmas markets in Prague are those in the Old Town Square and Wenceslas Square. You can find some stunning handicrafts and stocking fillers, accompanied by traditional sugary pastries, mulled wine, Czech beer and honey liquor. In the Old Town Square, you’ll find a Nativity scene with a real petting zoo, as well as a giant Christmas tree brought down from the Czech mountains. There’s also several smaller Christmas markets scattered around.When: Old Town Square market until January 1st; Wenceslas Square market until January 12th. Both from 10 am to 10pm.

FISHY CHRISTMAS DINNER– Walking through the streets of Prague during the run up to Christmas 2013 you’ll see giant tubs filled with live carp. Some families take them home and keep them alive in the bathtub for several days before cooking them for the traditional Christmas Eve dinner. It’s said that if you put a fish scale in your wallet, you’ll enjoy financial luck. If you don’t fancy cooking, don’t forget that many restaurants will be closed on Christmas Eve, so book in advance.

CHRISTMAS CONCERTS – Midnight mass in Prague can be very atmospheric, above all in Gothic St. Vitus Cathedral (St. Jacob’s Church is also highly recommended for its incredible organ music). Most churches and concert halls will also hold their own Christmas concerts between the 24th and 31st of December, with tickets to classical music concerts being sold on almost every street corner. Where: St. Vitus Cathedral, Hrad III. Nádvoří. When: recommended to arrive at around 11.45 pm.

BOTANICAL GARDENS – Find out the history behind the Christmas tree. A special Christmas exhibition will be held, entitled “The Plant as a Christmas Symbol” will be held in Prague’s splendidly beautiful Botanical Gardens to bring in the Christmas season. Where: Prague Botanic Garden. When: Until Jan 6th 2014, 9 am to 4 pm. How much: Adults 30 CZK, children under fifteen 20 CZK.

NATIVITY SCENES – Prague is full of Nativity scenes during Christmas. The Clementinium, where the National Library is based, will also be presenting a collection of Nativity scenes from across the centuries, including glass, gingerbread and sugar nativities. Where: Klementinum Galería. When: daily, from 9 am to 6 pm. How much: 50 CZK. Concessions (including children under five) 30 CZK. Under-fives go free.

ICE SKATING – Many squares, including Wenceslas Square and the Old Town Square, open up ice rinks during the Christmas period. The Ovocný Trh skating rink, behind the Estates Theatre, is also a popular choice – skating is free, and fees for skate hire go to charity. Where: Ovocný Trh. When: until January 6th, from 10 am to 10 pm. How much: free.

NATIONAL BALLET – As well as Christmassy musical performances such as the Advent Concert, the Czech Republic’s National Theatre will be running its popular festive ballet of The Nutcracker – A Christmas Carol, in a magical event which will get both children and adults tapping their feet. Where: The National Theatre. When: until January 12th. How much: from 120 CZK. You can buy tickets on the National Theatre’s official site.

Posted in Prague, Things to do in Prague
Marketing Team