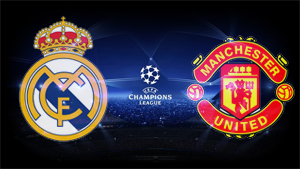 Madrid and Manchester to face each other in the Champions League in what shapes up to be a tough test for both teams. The first leg will be played in Madrid’s Santiago Bernabéu Stadium on 13 February and the return leg will be 5 March in Old Trafford.

Manchester United, Ronaldo’s old team, may not be as powerful as they once were but with players like current leading goal scorer of the Premier League Robin Van Persie and Old Trafford idol Wayne Rooney among their ranks they are sure to give it their all on the field. The Red Devils, leaders of the premier League already have two European Trophies in their possession however they have been eliminated twice by Real Madrid in anterior Champions League quarter finals. Will recent history repeat itself this year? If you want to find out for yourself live from the Satiago Bernabeu, why not reserve your tickets now and at the same time one of our Madrid apartments. The Spanish Capital has a lot to offer and the Champions League match up between Madrid and Manchester is a fantastic opportunity to discover it all.

What better way to prepare for the match than munching on various tapas like tortilla de patata, patatas bravas or if you want to try something really different a bocata de calamares all washed down with a perfectly poured larger. If you want something closer to home you could try the best hamburgers in Madrid.

There are other things than football to see in Madrid, it is a cosmopolitan city, with an enormous cultural heritage ranging from the Prado Museum to The Royal Palace with Debod Temple and Retiro Park inbetween. It is unnecessary to mention Madrid’s famous energetic nightlife which stretches on into the very early morning, no 3am lock out in Madrid. Whatever the result of the Champions League quarter final between Madrid and Manchester United you will not be left without a place to celebrate or commiserate in one of Madrid’s many bars and nightclubs.