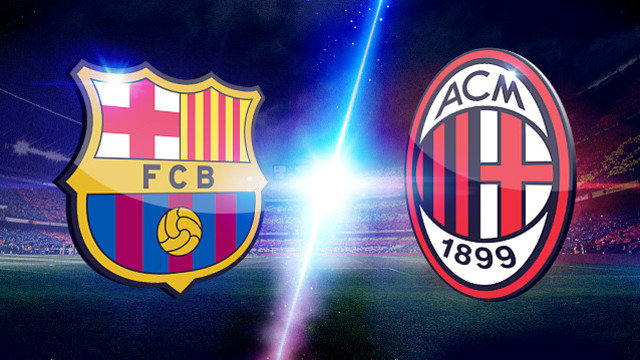 There was a lot of hype surrounding the match as too how much Barcelona were going to defeat Milan by in the opening match of their Champions league final-16 match up, however it was Milan who denied Barcelona with a superb defensive display and ran out eventual winners 2-0. Barcelona have a lot to do in the return leg of the final 16 match up between Barcelona and Milan to be played in the Nou Camp on the 12th of March if they want to make it into the quarter-finals of the Champions League.

Barcelona started strongly and enjoyed the majority of possession however the well organised and disciplined Milan defence denied Barcelona any scoring opportunities, again and again Barcelona came up against a defensive wall and by the end of the match Barcelona had only managed two shots on goal to Milan’s six.

With Barcelona seemingly having the match under control with the usual display of superb passing between the Barça players disaster struck early in the second half when a Montolivo shot rebounded off Alba before cannoning into the hands of Zapata then landing perfectly for Boateng, who struck a superb shot past keeper Valdés. And there was more to come with Barcelona pushing forward looking for an equaliser when a Muntari goal all but buried their hopes of winning. The goal came after a superb assist from El Shaarawy who controlled then chipped a pass which landed perfectly at the feet of Muntari.

The return leg of the final-16 Barça-Milan Champions League clash promises to be an intense match with Barça forced to score at least two goals and keep Milan from scoring. Milan will be expected to play the same game, with a very structured defence and waiting for theri oppoortunity to launch a damaging counter attack. Barcelona will feel confident they can turn the result around but history has shown Barcelona have trouble scoring against organised defensive teams. Milan must be confident of making it through to the quarter finals of the Champions league if they can produce the same kind of defensive effort as they did in the first leg. Messi who had a quiet night and for the first time in 11 games remained scoreless has to lift if Barça are going to pass the final-16 of the Champions league.

The return leg of the Champions League final-16 match between Barça and Milan promises to be another great night of European football and where better to experience the emotion of it all than at the mythical Nou Camp stadium. Enjoy the day walking the streets of Barcelona taking in the sights, for lunch you could head to the waterfront for paella and the final pre match preparations tapas and drinks in the bars and restaurants around the stadium before heading back to your accomodation in Barcelona.

Who will win the final-16 Champions League tie between Barcelona and Milan?