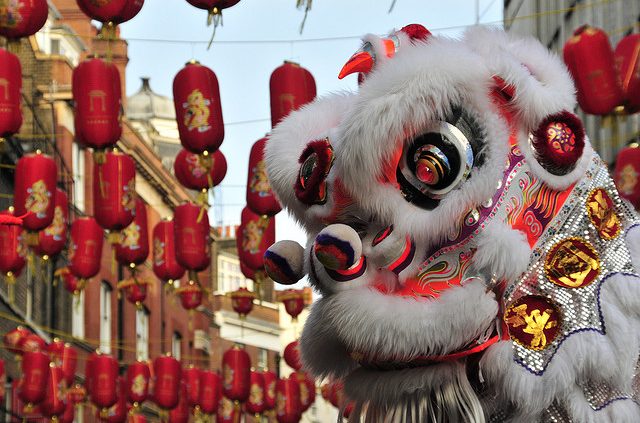 Just to the north of Leicester Square is the bustling hub of London’s Chinese community, Chinatown. It is a vibrant area, full of colour, the unusual, fantastic Asian cuisine, traditional medicine and authentic Chinese shopping. Chinatown is a must for anyone visiting London. So, let’s go exploring.

The original Chinatown wasn’t in fact where you find it today; it was in the East End. However work shortages and bombing during the blitz left the small Chinese community short of funds and a place to live but soon their luck was to change. British soldiers serving in the Far East had developed a taste for Asian cuisine and on their return sought out the Chinese restaurants which had appeared in Gerrard Street in the West End, and London Chinatown as we know it today was born.

Chinatown bordered by Rupert St., Shaftsbury Av., Leciester Sq. and Charring Cross Rd. is always a hubbub of activity with the pedestrian streets decorated with Chinese street furniture, there are even Pagoda style telephone boxes, full of shoppers and tourists looking for that special something from China. But what attracts most people to Chinatown in London is the food.

There are over eighty restaurants offering different cuisine form the Far East including Cantonese, Hunanese, Sichuanese, Taiwanese, Thai and Vietnamese just to name a few. With so many choices youa re sure to find something to tantalise the taste buds, if you are undecided then look for the restaurants where the local Chinese are eating, you won’t be disappointed. If cooking is more your thing, you will find all the ingredients you need in the Chinatown supermarkets to make your own Asian banquet.

The best time to visit Chinatown in London is during Chinese celebrations, such as Chinese New Year. The streets are festooned with lanterns and decorations as Chinese Dragons and Lions dance down the streets to the sound of drumming and gongs. There are many other events occurring in Chinatown during the year just check website of the London Chinese Chinatown Association.

On your next visit to London take a visit to the Far East and experience all Chinatown in London has to offer.