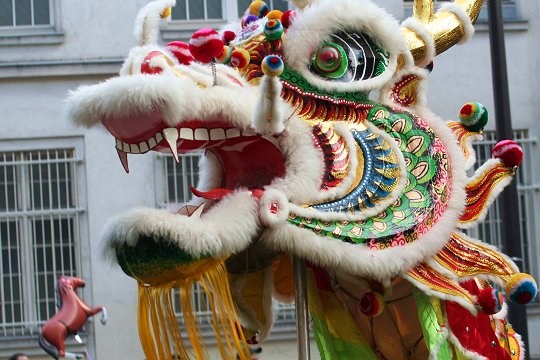 The celebrations in Paris just don’t stop as once you’ve had your fill of the Christmas events including the markets, the stunning festive lights and decorations adorning the city, News Year, Kings Day, and all the music festivals, in addition to the family celebrations and what the city has to offer in the way of culture you’d think that there would be a slight lull in its usually busy agenda. Think again because the French capital will soon be hosting the Chinese New Year or Spring Festival comprising one of Paris’s most popular annual events given that the city is transformed in an array of colours in honour of the thriving French-Chinese community who’s cultural influence on the capital is getting increasingly stronger. This exciting event that is a shining example of the cosmopolitan culture that reigns over the city, will be taking place on the 3rd of February 2011.

Parisians eagerly line the streets to catch a glimpse of this cheerful procession of dancers and musicians, vibrantly-hued dragons and fish, and elegant flags embossed with Chinese lettering, and boisterous Chinese restaurants are packed to the hilt with tourists and locals enjoying the celebrations. In addition to the colourful parade, there are further events taking place in the evening such as special music or theatrical performances, and film festivals in addition to dance performances, traditional events, lion dances, and lively martial art demonstrations. During this fabulous festival you can also try some delicious Chinese dishes and delicacies, and learn about customs that are followed by the Chinese community.

As per the Chinese Zodiac, the year of 2011 is the “Year of the (white) Rabbit”, a theme that will be carried out all throughout the festival. The event will start out with a firecracker show and people posing with the performers at the event, a string of acts, the Dragon Dance and blessings, and finally the Women’s Float, Men’s Float, and the traditional Red Lantern Procession, which is a symbol of good luck and prosperity for the Chinese.

Some of the highlights of the event definitely have to be the Dance of the Dragon which is a typical feature of Chinese celebrations and again is known for bringing prosperity, good luck, and spreading the cheery message of the festival, in addition to the Lantern Procession. The Lantern Procession falls on the 15th day of the festival and marks the end of the Chinese New Year celebrations with a party under the full moon. The families get together and make paper lanterns to light up and march under the full moon. Sometimes there are even competitions and prizes awarded for the most beautifully decorated lanterns.

We advise that you avoid going in your car as the streets will be full and that you head down to the celebrations taking place in the 3rd district (arrondissement) as they are usually the most stunning with the dance of the lions, the traditional costumes, and the parade of numerous dragons, although the events around around av d’Ivry and av de Choisy, in the 13th, as well as av des Champs Elysées in the 8th are also very entertaining.

So, if you’re in Paris this winter season we recommend that you head down to these fabulous celebrations and get a taste of Chinese culture first hand. Xinnián hao (Happy New Year)!