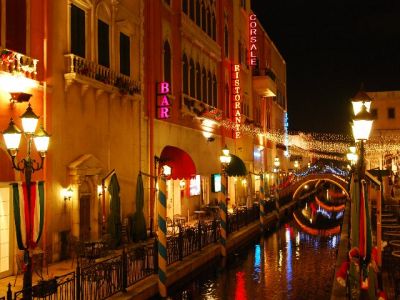 Christmas in Venice, a Magic City Have you ever dreamed of spending Christmas in Venice? Arriving at the city of canals by water taxi, seeing its Renaissance palaces appear slowly before your eyes and its golden lights reflected in the water?

Venice, with its gondolas, narrow streets, shops and markets, is a magic setting for enjoying your Christmas holidays. As well as visiting St. Mark’s Square, the Jewish Ghetto and other tourist attractions of the city, if you travel to Venice during Christmas you’ll be able to discover some of the traditional activities of this period, and try some typical dishes of the season like fish soup or panettone.

Things to do in Venice during Christmas

Among all the things to do in Christmas in Venice in 2015, take note of the following…

Natale di Vetro – On the island of Murano, the “Natale di Vetro” (Glass Christmas) has been celebrated for several years. During this event, activities and exhibitions related to glassworking will be organised, among which a regatta in which representatives of different glass factories will compete in festive dress. Where: Murano. When: from the 5th of December.

Midnight Mass –One of the typical traditions of Christmas in Venice is the midnight mass in St. Mark’s Basilica. Despite what it might seem, this nocturnal Christmas Eve mass is very popular, meaning that if you fancy seeing what it’s like, better to get there soon. Where: St. Mark’s Basilica. When: 24th December at 23.30 pm.

Posted in Things to do in Venice, Venice
Laura