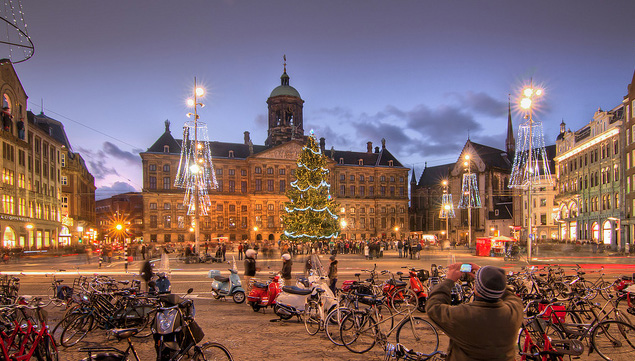 Lights, Magic, Tradition and Markets during Christmas in Amsterdam

Christmas in Amsterdam is a special time of year; the squares are taken over by Christmas markets, the air is filled with the aroma of gluhwein and poffertjes, children get excited about the arrival of Sinterklaas, the streets are lit up by thousands of twinkling lights. It is a magic time and here is just some of what you can expect during a Christmas in Amsterdam.

Sinterklass- Christmas come early for Dutch children, December 5th to be exact when Sinterklass accompanied by his helper Zwarte Piet drop presents down the chimney for all the children. Shoes are placed by the fireplace with a note for Sinterklass and a carrot for his horse. Events begin with his arrival in Amsterdam in mid-November.

Christmas Markets- During Christmas in Amsterdam the markets come alive with fairy lights, the stalls laden down with typical Christmas treats and snacks. At either end of the Leidsestraat you will find various market stalls, an ice rink and food stands until mid-January. Amsterdam’s biggest market the Albert Cuypmarkt has a a special winter market on the Sunday before Christmas and the Flower Market is a great place to pick up the family Christmas tree.

Winter Parade- A special winter festival offering a mix of theatre, dance, poetry and interactive fun. More than 500 people are seated around a giant dinner table enjoying a special set menu and the incredible performances. The festival finishes with a Silent Disco. Where: Oude Kerk When: 14 Dec- 4 Jan.

Ice Skating- When the temperature falls the locals grab their skates and head to one of Amsterdam’s ice rinks for a spot of skating. The biggest is the Jaap Eden ice rink to the east of the city, a number of smaller ice rinks open in the city including ones in the Leidseplein and Museumplein. If you are very lucky, the canals might freeze this Christmas in Amsterdam which will give you a once in a lifetime opportunity to skate on the canals.

Events occurring over the Christmas Period which we haven’t mentioned include the Amsterdam Light Festival, Tangomagia, Classical Music performances, Pink Christmas and much more. For more information about what’s happening in Amsterdam this Christmas visit Iamsterdam.com.