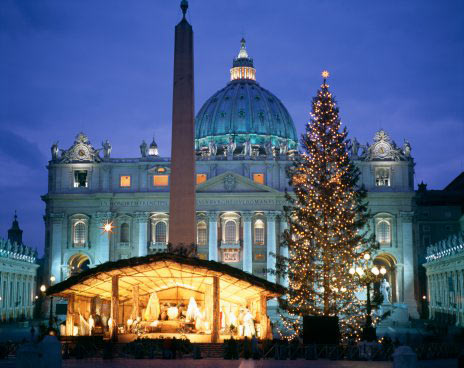 Things to do this Christmas in Rome

Christmas in Rome is celebrated in a very special way. The magic that takes over its ancient landmarks and patrons of the art is especially potent this festive time of year. Christmas trees are set up in the squares, multicoloured lights decorate the streets and there are bustling markets, traditional celebrations, shows and music. All this and more in Rome, the great place to go away for a Christmas break.

If you’re travelling as a family, you will surely want to visit the numerous nativity scenes set up in the major Roman Catholic churches and their squares over the festive period. The prettiest include those decorating Piazza de San Pietro, Piazza di Spagna, Santa Maria in Aracoeli and Santa Maria del Popolo. Faithful followers amongst you may want to head to Midnight Mass on the 24th of December held in the Vatican and listen to the Urbi et Orbe blessing given by the Pope on Christmas Day from the main balcony of Saint Peter’s Basilica.

The Christmas Markets are another major attraction over the festive season in Rome. The oldest is that located on Piazza Navona. From the 24th of November 2013 to the 6th of January 2014, you will find delicious products and typical sweet treats, Christmas decorations, toys and all kinds of handcrafted goods there. Amongst the great presents you can buy as souvenirs, there are the little Befana figures. With her old shoes and wide-brimmed hat, Befana the witch is one of the central characters of Christmas in Rome. On the 5th of January, she mounts her broomstick and hands out presents, sweets and coal to Italian children.

Music and shows is another star of Christmas in Rome. From the 21st of December 2013 to the 16th of January, the Teatro dell’Opera di Roma offers fairy tales in the form of ballet including Swan Lake by Piotr Ilich Chaikovski, one of the most popular ballets of all time and favourite at Christmas time.

Natale all’Auditorium (Christmas in the Audiorium) offers a wide range of concerts and activities aimed at families. Outside, the Auditorium is transformed into a small theme park, with a colourful carrousel and ice rink. Whilst there is no end to the shows scheduled inside. The Roma Gospel Festival, boasting the participation of some of the best gospel choirs in the United States, will be offering a great performance on the 31st of December.

Further highlights include a puppet show by the famous Sicilian story teller Mimmo Cuticchio taking place from the 27th to the 30th of December.

And Finally to bid farewell to 2013 there are various classical music performances taking place across the city and include ballet, costumed Aria singers, Verdi’s La Traviata and much more. At natale all auditorium visitors will enjoy Afrique, an event exclusovely dedicated to the African continetn featuring folk dances and works of South African composer Kevin Volans. Outside the auditorium a contemporary Christmas Circus will be set up which is sure to delight the younger members of the family.

To conclude, there are lots do at Christmas in Rome, as well as a great festive atmosphere. Enjoy!