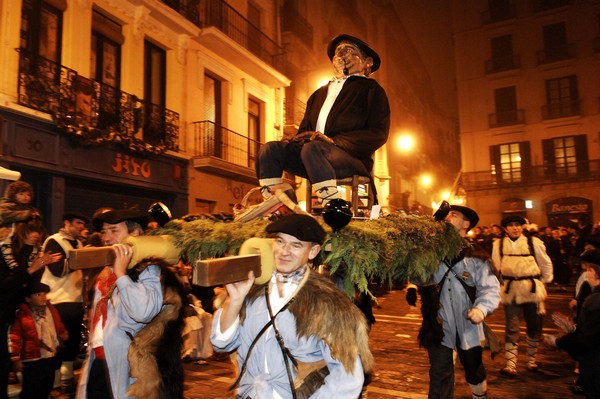 San Sebastian during Christmas is full of enchantment where the traditions of the Basque country, like the Olerentzo, combine perfectly with other widespread Sapanish traditions, turron, christmas markets and of course the grapes on New Year’s Eve. We’ll tell you what is happening in San Sebastian this Christmas.

Every 21st of December one of the San Sebastian’s most important fairs takes place, which is none other than the Saint Thomas’ Fair. Fresh farm produce and other artisanal goods go on display in Plaza Constitución and around the city. Contests, a live pig raffle, and bocadillos de chistorra (a sandwich with a kind of Basque chorizo) are just some of the main features of this market. The origin of this fair is unclear, however it would appear that in the past when winter arrived the tenants of farmhouses situated outside the city would come down to the city and pay the annual rent to the land owners. One of the reasons for why they came to the city with money and food was to stock up on supplies for the coming winter. Thus, in the city squares they exchanged all kinds of farmyard birds, vegetables, crafts, and food products. For a taste of Basque culture take a wander through this enchanting market.

If you fancy taking something really traditional back with you from the Basque country, then you should head down to the Christmas Craft Fair in San Sebastian celebrated from the 17th of December to the 5th of January, near the Buen Pastor Cathedral. At this fair you will find mainly craftworks, jewellery, ceramics, and traditional clothes from the Basque Country although you can also buy other crafts products from other Spanish provinces and regions invited to participate in this festive event.

So that children have a great Christmas, San Sebastian organises a Children’s Christmas Park every year which takes place during the last week of December.The Palacio de Kursaal, hosts the event with lots children’s activities and presents for those attending. Amongst the abundance of activities on offer there will be trampolines, bouncy castles, raffles, performances, a toy library, workshops, and children’s play area for all ages. There will also be a stage for a spot of karaoke, jugglers, magicians, mimers, and a tombola with different prizes to be won, everything that is guaranteed to make sure that children have fun this Christmas in San Sebastian. This Christmas it will be from the 17th of December 2015 to the 7th of January 2016.

Basque children are very lucky because thanks to the combination of traditions they receive presents on two seperate days during Christmas. On the 24th of December, Olentzero, a jolly coal merchant comes down from the mountain to spread the good news of Jesus’ birth on the streets of San Sebastian via a special parade. During the parade he gives out presents to good children, more or less like Father Christmas but Basque style.

The 6th of January children receive presents from the Reyes Magos (Three Kings). As part of this tradition, children and their families gather on the streets on the 5th of January to watch the Kings’ parade and greet the Three Kings who have come all the way from the Middle East to hand out their best presents to good children. Now, that is lucky!